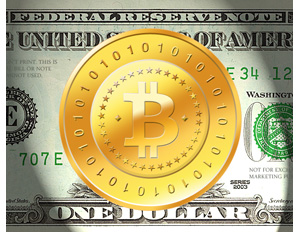 “People liken it to digital gold,” says Edwardo Jackson, an author, entrepreneur, and authority on bitcoins. The “it” that Jackson is referring to is a bitcoin—an encrypted digital currency and infrastructure. Jackson and other growing voices are convinced that bitcoins are not only the finances of the future, but they are a potential way for African Americans to further their financial status and their businesses.

Bitcoins are digital, so there are no banks, or paper, or even actual coins involved. A solid definition, according to lifewire.com, is that they are “electricity converted into long strings of code that have money value.” Instead of a bank, hundreds of computers all over the world are set up by regular, everyday individuals as “bitcoin miners.” These computers process bitcoin transactions.

Online sites, such as BitoCoin.com, serve as exchanges where the currency is purchased. The first step is to select a digital wallet to store and manage bitcoins. There are an abundance of bitcoin wallet sites to choose from, including Bither, Breadwallet, and Bitcoin Wallet. The wallets vary in where the bitcoins can be stored (mobile device, desktop computer, cloud service), in the user interface, and in the levels of security.
Jackson is fond of defining it for laymen as “PayPal without the bank.”
“Instead of going to the traditional banking system, it’s a peer-to-peer transaction,” Jackson continues.

A New Way to Invest

Bitcoin values fluctuate, just like gold. The price depends on supply and demand. Jackson says there will only be a finite amount of bitcoins mined, which can greatly increase their value.

Currently, one bitcoin is worth $2,285.85 (at press time). Bitcoins can be purchased in fractional amounts; it’s possible to buy only $10 worth of a bitcoin, for example.

As with gold, a bitcoin owner can hold onto the currency and see if it increases in value over time. Years ago, a bitcoin was worth about $5, so selling at the current price would be a significant return on investment.

“Some people [are] sitting on tens of millions in bitcoins, [which] they got for $5,” Jackson says.

Because of this investment potential, Jackson says he is “hodl,” a meme used by the bitcoin community and an intentional misspelling of “hold” indicating bitcoin users who avoid the temptation of selling off their coins once prices start rising.

“One of the best things I do for my mom, when I can, [is buy her bitcoins]. She tries to add a little more to it. She loves watching it grow. If you put X amount of dollars into Starbucks at 25, by the time you are 40, it will be worth a million—kind of the same thing, but more accelerated.”

As with any investment, there are risks. There is no guaranteed value, and bitcoins have seen some wild fluctuations in price. Even Bill Gates sees the volatility and risk of cybertheft as big risks with investing in bitcoins, according to an interview he did with The Verge. If either happens, there’s no depositors insurance to turn to. Also, in a worst-case scenario, governments could ban the use of bitcoins, or enough people could stop accepting them, thus making your investment worthless. Jackson however, remains optimistic: “I believe, over time, this thing will be worth maybe even a million per bitcoin.”