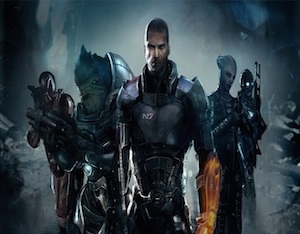 Last week was huge for gamers as the 2014 BlizzCon took place in Anaheim, California. But, little known to the casual player, it was also N7 Day in celebration of BioWare’s sci-fi epic Mass Effect.

The team, which is owned by Electronic Arts, originally teased the highly anticipated fourth installment of the game at E3 in June. On Friday, the company leaked a few new images of concept art that gives die-hard fans and newcomers alike a strong look at what Mass Effect 4 will look like.

BioWare held a live Mass Effect developer’s round table discussion on Twitch for interested parties to see. The images show off a variety of locations, ranging from a colony nestled beside a waterfall to full scale imaging of a Stanford torus, a common space station design used in science fiction.

Mass Effect 4 is absolutely great to see, even if the images don’t showcase any particular aspect of the actual game. It looks like there will be new planets and alien landscapes to explore, as well as exciting new terror threatening the universe. While there’s no confirmed date as to when we’ll see the actual game in action, it’s safe to say that BioWare and EA are moving in the right direction.

On the next few pages, you can take a look at the concept art for Mass Effect 4 for yourself…