A Billion Reasons to Watch Our World! 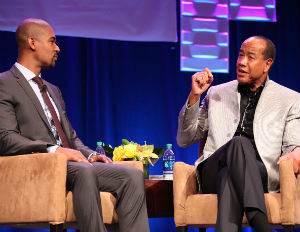 Every June, Black Enterprise compiles a list of the most successful black companies who serve as suppliers to some of the world’s largest corporations. These companies bring in more than $32 billion in combined revenues, ranging in industries from technology and pharmaceuticals to consumer goods and retail. This annual report (The BE 100s) is more than just a listing of those companies. Since 1973, the BE 100s have celebrated both popular and less known, but equally successful, business titans.

[Related: Steve Harvey is Bringing Home the Bacon and Cooking it With Ease]

On this edition of Our World with Black Enterprise, we highlight three of the 2015 Black Enterprise Companies of the Year, along with an exclusive one-on-one with multibillion-dollar investor Michael Lee Chin, chairman of Portland Holdings. Chin shared with Our World‘s host, Paul C. Brunson, that his formula for building wealth is based on the philosophy of Doing Well by Doing Good.

Our Industrial Services Company of the Year is a former NBA player who is making a slam-dunk in the fast-food franchise. Ulysses Bridgeman, CEO of Manna Inc. is the second largest franchisee of Wendy’s Restaurants with 240 restaurants across 16 different states.

Then, we follow financial guru David Grain, CEO of Grain Management, who making it big investing in wireless technology. His firm is this year’s B.E. Financial Services Company of the Year bringing in $900 million under management. Grain learned that building a successful business depended on the right relationships.

And finally, our last CEO says his relationships, both personal and professional, have tripled his revenue growth. Michael Martin may have inherited a family-owned auto dealership, but now with four dealerships under his belt and the assistance of his family, he’s increased his capital by 164% within a year. Its’ no wonder he was BE’s Auto Dealer of the Year.

All that and more on this special BE 100s edition of Our World with Black Enterprise.

Our World with Black Enterprise can also be seen on UP television station. Check your local listings and visit dev.blackenterprise.com/ourworld for additional time and station information.

What You Need To Know About This Black Hair Millionaire