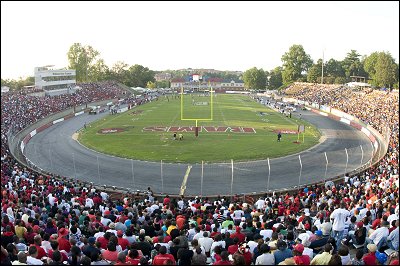 Winston-Salem State has won a lot of football games at Bowman Gray Stadium in the past few years, but it may have scored its biggest win in the North Carolina State Legislature. The Winston-Salem Journal reports that the university’s bid to buy the stadium from the City of Winston-Salem, tentatively agreed to by the NC General Assembly on Wednesday, was approved by the Senate on Thursday.

The bill containing the proposed $7.1 million purchase, passed on a 102-10 vote, according to state Rep. Ed Haines.

This news comes a little over a week after the university’s plan to buy the stadium appeared to hit a snag. A state House Finance Committee stripped the project from a bill that supporting improvements to schools in the UNC system after some legislators expressed opposition. A representative from Winston-Salem’s home county halted the bill after expressing concern over how the proposed purchase would effect stock car racing at the stadium.

Bowman Gray is considered hallowed ground for many racing fans, as it is known as “NASCAR’s longest-running weekly race track.” After the bill was stripped, delegates from the university, the city and the Winston-Salem Speedway INC met and hammered out some final details, according to state representative Donny Lambeth.

Those details include the following provisions:

The university will continue to use the stadium as a home football field, and will be allowed to use the surrounding land for future development.

Read the rest of the story at HBCU Gameday.

6 Apps Every Small Business Owner Should Use