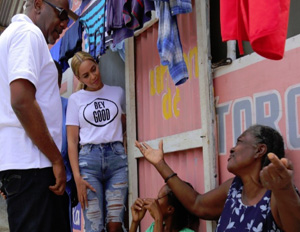 Beyonce traveled to Haiti recently to view the country’s progress since the 2010 earthquake, according to reports.

Valerie Amos the Emergency Relief Coordinator, UN Office for the Coordination of Humanitarian Affairs (UNOCHA) accompanied BeyoncÃ© on the humanitarian trip to Â the caribbean country with the first stop being an IDP Camp in Caradeux; a place where many Haitians settled after the quake, which measured a 7.0 on the richter scale and claimed the lives of more than 230,000 people.

While the popstar took to Instagram to share her experience with her 33.3 million Beyhive followers, the American Embassy in Haiti took to Facebook in search Â of suggestions and Â flourishing locations worth a Beyonce visit.

“Beyonce is still here and she wants to see the progress since the earthquake. Where should she go to see progress in Haiti? Let us know,â€ the Embassy indicated via the social media site.

Some Facebook users questioned whether the purpose of the trip was genuine or just another charitable photo-op as Bey stood fashionably poised in a “Bey Goodâ€ tee among displaced locals struggling to rebuild.

One user criticized Beyonce’s past trips abroad, implying they were prime examples of exploitation. The user pinpoints Thailand in particular:

“BeyoncÃ© rides a tortured and exploited elephant In Thailand. Then she hold [stet] a tiger cub only encouraging the exploitation of wild animals being bred for tourists and selfies, said Facebook user Lindsay McBride, “As adults the tigers are shot in canned hunts Now, she goes to Haiti to exploit their suffering for public relations. Wake up people.â€

Carter and her team also visited the privately funded NPH Saint Damien Hospital, which provides medical treatment for sick and disadvantaged children, according to her Website, however, it’s unclear if she and her team were involved in any volunteering or if contributions were made during their visit.

In the past the #BeyGood organization has openly supported causes such as Autism Speaks, Nepal earthquake relief efforts, Earth Day and several others.

Check out updates from the #BeyGood Haiti trip below: