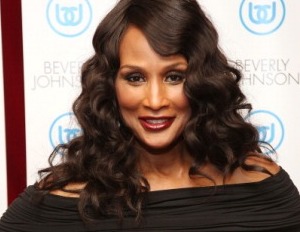 The popular culture, fashion, and current affairs magazine Vanity Fair recently published an essay written by legendary supermodel Beverly Johnson in which the 62-year-old New York native accuses Bill Cosby of drugging her in the mid-80s.

According to Johnson, the incident occurred during an audition for Cosby’s NBC hit, The Cosby Show.

Cosby said he wanted to see how I handled various scenes, so he suggested that I pretend to be drunk.â€ Johnson recalled in her piece. “As I readied myself to be the best drunk I could be, he offered me a cappuccino from the espresso machine. I told him I didn’t drink coffee that late in the afternoon because it made getting to sleep at night more difficult.â€

After insisting that she drink the cappuccino, Johnson tells the magazine that, by the second sip from her cup, she knew that she’d been drugged, “and drugged good.â€

This follows similar remarks made by Janice Dickinson, Tamara Green, Barbara Bowman and 21 other women.

“My head became woozy, my speech became slurred, and the room began to spin nonstop,â€ Johnson said. “Cosby motioned for me to come over to him as though we were really about to act out the scene. He put his hands around my waist, and I managed to put my hand on his shoulder in order to steady myself.â€

Realizing that she was in a compromised situation, Johnson admitted to Vanity Fair that her body went “completely limp.â€ She indicated that she yelled at the comedic entertainer, saying, “You are a mother—— aren’t you?â€

Reportedly angry at Johnson’s retorts at Cosby, the television star yanked the supermodel down a set of stairs, pulled her outside and hailed a cab for her. “It was still late afternoon and the sun hadn’t completely gone down yet. He pulled me outside of the brownstone and then, with his hand still tightly clenched around my arm, stood in the middle of the street waving down taxis,â€ Johnson wrote.

She continued by indicating that Cosby shoved her into a cab without ever saying anything to her, and she eventually “blacked outâ€ after telling the cabbie her address.

This latest revelation took the Web by storm. Johnson admitted that she considered coming out in her 2013 memoir, but recanted. “I didn’t want to get involved in a he-said/she-said situation,â€ Johnson said. “Black men have enough enemies out there already, they certainly don’t need someone like [me], an African American with a familiar face and a famous name, fanning the flames.â€

However, Johnson was inspired by her friend and fellow supermodel, Janice Dickinson to go public with her tale. “Now that other women have come forward with their nightmare stories, I join them,â€ Johnson said. “Many are still afraid to speak up. I couldn’t sit back and watch the other women be vilified and shamed for something I knew was true.â€ The ever-growing list of accusers now stands over 25 women and all have claimed that Bill Cosby has sexually assaulted them, with drugging being a common theme in the claims.

The now-77-year-old Cosby has fielded responses through his attorney, Martin Singer. “The new, never-before-heard claims from women who have come forward in the past two weeks with unsubstantiated, fantastical stories about things they say occurred 30, 40, or even 50 years ago have escalated far past the point of absurdity,â€ Singer said. “It is completely illogical that so many people would have said nothing, done nothing, and made no reports to law enforcement or asserted civil claims if they thought they had been assaulted over a span of so many years.â€

As this situation continues to develop, the backlash against Bill Cosby has been swift. From NBC backing down from plans to develop a new sitcom that would have starred Cosby to the U.S. Navy revoking his honorary title of Chief Petty Officer (which was bestowed to him in 2011), a heavy hammer is coming down on anything close or related to Cosby.

According to reports, representatives for Johnson and Cosby could not be reached and have yet to respond to any of the developments from the Vanity Fair letter.

On the following pages, check out the social media reaction to the essay. Voice your own thoughts and opinions in the comments section below.