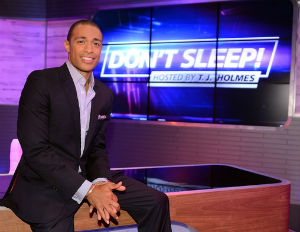 T.J Holmes is getting an expanded segment, but a decrease in time due to struggling show ratings.

‘Don’t Sleep‘, which aired Monday-Thursday for a half an hour, will now become a weekly one-hour segment airing on Wednesdays at 11 p.m.

BET cites this development due to an ‘overwhelming demand’ from viewers. According to reports, the shows launch averaged 400,000 viewers the first night and has only come close to 1 million viewers once. It has since experienced a decline in viewers.

Nick Cannon is ‘Wild â€˜N Out’ Again on MTV2