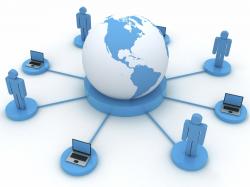 Abiola Abrams may not have the deep pockets of a large publishing conglomerate, but what she does have is a powerful business-building tool: a presence on social networking sites that target the black audience. Using online platforms such as BlackPlanet, this Harlem-based BET host and author of the novel Dare, has been able to drum up publicity and attention for her book and for herself without breaking the bank.

“When my book came out a year ago, there was no marketing budget for it,â€ recalls Abrams, who bills herself as a “smart, high-energy, big mouthâ€ who likes to have fun. But getting the word out about a comedic retelling of a classic German fable is no easy task. Taking a page from comedian Dane Cook — who credits some of his success to his popular MySpace page — Abrams turned to social networking, a process by which communities of people with shared interests interact online.

After learning about BlackPlanet, and its popularity among African American users, Abrams created an online, celebrity-oriented talk show that would serve as a publicity vehicle for her novel. Less than two months later, Abrams had about 300,000 friends. That number has since increased to 500,000 — all “with no marketing budget whatsoever,â€ Abrams says.

Through the social networking site, Abrams also created a virtual book tour that resulted in 10,000 unit sales of Dare. “After those sales, the publisher took notice and developed a real, 5-city book tour for me,â€ says Abrams, who set up a dedicated social network page to market the virtual tour, which attracted 200,000 online subscribers. “Using the targeted social networking sites,â€ Abrams says. “I’ve been able to hone in on my audience and grow my business.â€

InÂ  the past few years, a slew of black-oriented social networking sites have cropped up, and today include BlackinTouch.com, Tribefly.com, UpliftthePeople.com, AllUrban.com, and BlackPeopleOne.com, just to name a few. According to Keith Bowen, chief revenue officer for New York-based Interactive One L.L.C., which owns BlackPlanet, about 42% of all blacks online are using social networking. “That number is expected to grow as more and more people dive into online social networking and experience its benefits,â€ Bowen says.

Small to midsized firms that lack the resources needed to market their products and services in more traditional ways often see the most gains from their social networking activities. By devoting just a few minutes a day to updating a blog, uploading a video clip (of a new product demonstration, for example) or responding to customer feedback, entrepreneurs can not only interact with potential customers, but also maintain ties with existing subscribers.

To get there, users must first visit the site of interest, register, and then create a profile that others can access. Like any type of Web content, the profile should be updated regularly (at least daily, although weekly or monthly can also work,