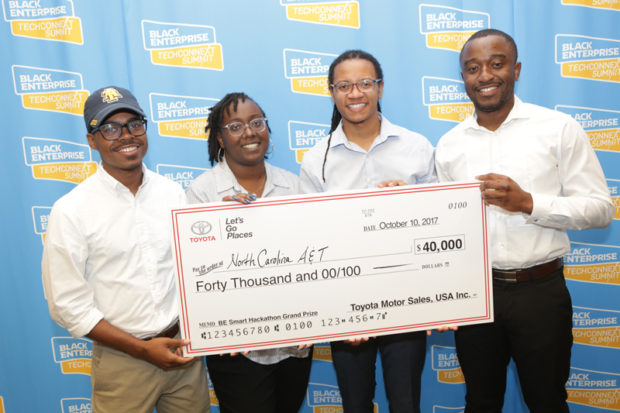 The BE Smart Hackathon 3.0 has been an astounding success! For the first time teams won second- and third-place prizes, and the top three teams presented from the main stage in front of all the TechConneXt Summit attendees.

The top three teams hailed from Fisk University, one of five schools to participate for the first time this year; Morehouse College; and North Carolina A&T State University—which repeated its victory of last year by winning first place this year.

All the teams put in a lot of work—many students hacked all night and were found sprawled out on the floor the following morning. Each of the 15 schools learned about collaboration, innovative thinking, working with mentors, and public speaking. In their own way, each team won. Many students told me they plan to return next year and win first place.

Toyota, this year’s hackathon sponsor, provided an awesome first-place prize of $40,000 to the team that won first place—$10,000 to each student on the team.

Samsung Tablets went to the second-place winners and Galaxy Notebooks to the third. The schools did not know the prizes until Saturday, the first day of the hackathon.

Toyota charged the teams with developing an innovative in-store retail experience that would incorporate the newest technologies and invigorate the car-buying experience. Students worked hard to develop solutions and presented their ideas before a panel of three judges: Coniah Adams, a media, digital, and brand strategist with Burrell Communications; Hahna Alexander, co-founder and CEO of Sole Power and a Toyota Mother of Invention; and Chris Norwood, founder and owner of the Bay Area Tutoring Association, which provides coding instruction along with other tutoring services. Norwood was one of our judges last year as well.

Using several APIs including APIs from Twilio, also a BE Smart Hackathon sponsor, and working with mentors from both Toyota and Twilio, the students developed truly creative approaches to the in-store car-buying experience. The teams did outstanding work; the top three presented with confidence and clarity and displayed technical achievement.

In addition to the hackathon, held Saturday and Sunday, all 60 students enjoyed a daylong recruiting program at Salesforce, the cloud computing company. Deven Berry of Dillard University, one of the schools to participate for the first time this year, told me that the day at Salesforce was a highlight of his time in San Francisco.

“I liked that we got to tour the offices and talk to people working at their desks,” Berry said.

The students also ate breakfast at Google and learned the intricacies of applying for a Google internship from Google employee Erika Graves. They also heard from Angela Taylor, a Google software engineer who had started out in human resources and learned tech on the side—taking classes and teaching herself—before moving over to engineering.

At Intel, the students met Joseph Nsengimana, executive director of Diversity and Inclusion Policy, Strategy, and External Partnership, who coordinated the tour. Marcel Kasmer spoke about Intel’s 360-degree technology that’s used in sports replays—very impressive. There were also a panel discussion and an honest and exhilarating diversity Q&A. The trip wrapped up with the students surrounding and learning about a couple of autonomous cars on the Intel campus.

“This was awesome.” “It was great.” “Honestly? Can we come back next year?” These were comments I heard from students, along with suggestions for improving the overall experience.

Where can tech take you? Find out at next year’s Black Enterprise TechConneXt Summit and BE Smart Hackathon!

You Can Learn to Code—Without Taking on Debt