The BE Smart Hackathon 2016 Begins! 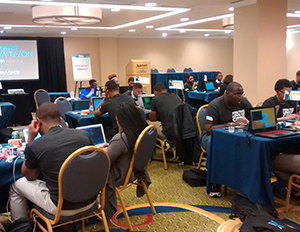 The Black Enterprise TechConneXt Summit officially starts tomorrow, but the second annual BE Smart Hackathon sponsored by Toyota has just started. Already there is plenty of excitement and energy to spare.

Yesterday 10 teams from 10 historically black colleges flew into an unusually hot San Francisco. The students spent Saturday getting settled and, to break the ice, went toÂ a nearby bowling alley and bowled on teams made up of students from different schools.

The bowling was sponsored by Prudential, and five Prudential staff bowled with the students and engaged with them, tellingÂ them about Prudential’s broad footprint in financial services and why they should consider Prudential as a potential employer or for an internship.

Teams of four students each represent the following HBCUs:

Two students won a MillerCoors contest and are attending the summit under MillerCoors’ sponsorship.

The Best and the Brightest

“We are connecting black talent to Silicon Valley,â€ he said. “We’ve doubled the number of students and schools from last year to show tech recruiters that black talent is available for them to hire.â€

Graves described how pervasive technology is, having entered just about every industry, and how these students are smart to take advantage of tech and networking opportunities like the BE Smart Hackathon.

During breakfast, I sat with students from Alabama A&M.

“I’m so glad I’m attending Alabama A&M,â€ Kristina Williams told me. The comp sci major is a native Alabamian. “My professors care about me. My classes are small. I was given a lot of financial aid.â€ Williams had spent time at the state university as a high schooler, but chose Alabama A&M because of its financial, academic, and social support.

James Burrell, a senior electrical engineering major, had transferred from Alabama’s state school and could compare the two experiences. He agreed with Williams. “It’s completely different,â€ he said. “There’s much more support–practical support, in that my professors have given me paid jobs.â€ Â The other students then described how their professors had also said things like, “I like how you code,â€ and then hired them or provided introductions for employment.

Tsige Zergaw, originally from Ethiopia, described the campus’s natural beauty. “I’ve gone hiking in the area and it’s really beautiful,â€ she said. The campus is on a mountain, so it’s easy to appreciate the landscape below.

What about diversity? Will these students be prepared to work in an environment that will probably be majority nonblack?

Richard Embden, also an electrical engineering major, says yes. “Most of the students are black, but most of our professors are international.â€

For more about the BE Smart Hackathon, go to the Black Enterprise TechConneXt Summit website.

Mobile Technology: A Vehicle for Economic and Social Empowerment, Part 2