Name: Tony Forte
Profession: President of Urban Professor and The Silver Spoon Foundation
Age: 34
One Word That Describes You: Positive

Nowadays, brands have become synonymous with celebrities, lifestyle, and making a business out of one’s self. For Tony Forte, the 34-year-old founder and brand director of Urban Professor, it is a way of life and a bridge for the budding young professional. Inspired by the work constituted through his portfolio, Forte’s credo of “Why not?” has enabled him to develop youthful minds into “successful and conscious professionals” by relating to them on their level. “There is just so much to learn and become exposed to that the desire for more became paramount,” he told BE Modern Man exclusively. “I had to overcome the obstacle of using the excuse of ‘not knowing’ as a reason to be comfortable with my station in life.”

A journey down Forte’s rabbit hole will see brands such as Nike and Sean John associated with his unique penchant for lifestyle branding. As the founder of both Urban Professor

and the Silver Spoon Foundation, a charitable system that empowers supporters of the young to invest in a career development pipeline, Forte prides himself on forging success out of driven young souls. “We, as black men, have a rich legacy encompassed of the highest of highs and also the lowest of lows,” he says when asked about key tenets to black men’s success. “It’s hard to make such a blanket statement that suggests that black men carry something that is so elusive for attaining success from any other race. When we channel the pride and self-worth associated with our highs, along with the resilience, courage, and faith associated with our lows, we have a unique story line that lends to our path to success.”

Early in Forte’s career, he worked for Sean “Diddy” Combs and his Sean John Clothing Co. A graduate of Tennessee State University, this marketing master learned a lot from the Harlem hustler about solving problems and overcoming obstacles. With stints at Russell Simmons’ Phat Farm, shoe magnate Nike, and LUTA Inc., a boxing/MMA brand invested in by the Adidas Group, Forte cultivated his own forte (pun intended) and became a wealth of knowledge for young and veteran professionals alike.

“By being relatable and never getting so high on the sauce that one becomes unreachable or appears beyond the ability to connect [is how one becomes a role model]. Being barbershop friendly and boardroom worthy is key, too.” The Urban Professor founder has seen a lot, learned even more, and traveled as a result of his hard work and effort, yet that doesn’t mean squat if he’s alienated others or made people feel uncomfortable. When asked about how men of color are championed in the mainstream media, he says: “We must often work much harder just to get a seat at the table, but when we get to that table we do get championed [in my opinion]. We get so much love just for getting there at least from our community.” Asking when will our culture evolve to the point that those who are doing the celebrating will also commemorate the other existing standouts in other fields, Forte proves that not only is our normal, extraordinary, but that we will continue to push forward in all aspects of our professional lives.

Forte, a man with strong character and honed passions, sees himself as being cognizant of who he is and his impact within the community. “I envision my impact as an internal compass that I began using several years ago,” he told BE Modern Man exclusively. “I understand that my words and actions will reach a place I may never visit and a person I may never meet, so I know how I must present myself to the world at all times. As the ‘Voice of the Young & Driven,’ I will continue to raise awareness and support for Urban Professor and the Silver Spoon Foundation to help under-served college students.”

Exhibiting the traits of strength, fortitude, and a valued commitment to excellence, Tony Forte’s take on what a BE Modern Man is serves as an intriguing reminder of what we as men of color  offer the universe:  “The BE Modern Man is promising and purposeful,” he tells us. “The definition will change as we delve deeper into the 21st century, as the promise meets the purpose, and creates a positive and measurable impact.” 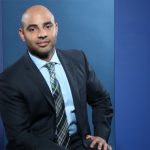