BE 100s: 5 Tips On How To Position Your Business 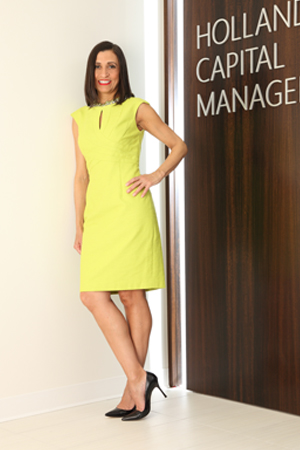 University of Wisconsin Hall of Fame halfback Louis A. Holland entered the investment arena in 1968 at a time when big firms weren’t looking to African Americans to manage money. But the former Wisconsin Badgers and Chicago Bears player worked hard and became a giant in the stock-picking world. You can trace his growth as an investment management executive and entrepreneur from firms Commonwealth Edison to A.G. Becker Paribas to Hahn, Holland and Grossman, which he founded in 1983. Holland commanded so much respect as a stock pro that he appeared as a regular panelist on the PBS television program “Wall $treet Week” with Louis Rukeyser for 22 years.

When Monica L. Walker, a cowgirl from Texas, met Holland, a Wisconsin farm boy, the two instantly hit it off. He decided to launch another investment firm and encouraged Walker to join him. “We shared the same values. He believed in intellectual honesty, teamwork, and dedication to excellence,â€ says Walker, who was then a manager of trust fund administration for Texas Utilities’ $1.5 billion pension fund and defined contribution plan assets. A licensed CPA, Walker had begun her career at Texas Utilities in 1981 serving in various supervisory capacities and working in the corporate finance group.

Holland Capital had $2.1 billion in assets under management when its 71-year-old namesake retired in 2007. For 17 years, Holland acted as CEO before his heir apparent, Walker, who was 49, assumed the helm first as president and chief investment officer in February 2008, and then as CEO and chairman of the board in 2009.

Since making the transition from the leadership of its patriarch to the new guard over the past six years, Holland Capital hasn’t just survived a decline in assets, weak relative portfolio, client losses, and the Great Recession–it has thrived.

“We were able to make it through the financial crisis and reap the benefits of our good relative performance,â€ says Walker. “We take a conservative, methodical approach to how we manage money and how we manage our business.â€

Today, Holland Capital offers 100% equity portfolio management, mainly to institutional investors, with $4.9 billion in assets under management, up from $2.8 billion in 2012–an outstanding 76.9% jump. The 20-employee firm rose to the No. 8 spot on the BE Asset Managers list, managing assets across a client base of public and corporate pension plan sponsors, unions, endowments, foundations, two mutual funds (as a subadviser), and a limited number of wealthy individual clients. The firm has 61 accounts, mostly public pension plans, with the average account balance around $76.1 million.

Holland Capital’s increase in assets came from a strong equity market during the year as well as new client gains, including a major win to the tune of $1.3 billion–a subadvisery relationship with Columbia Management (owned by Ameriprise Financial). Holland Capital is the sole manager of the Columbia Variable Portfolio Holland Large Cap Growth Fund, a variable annuity product.

“Monica is a very thoughtful leader and is spearheading the effort to drive the company through its second generation of leadership,â€ says Paul Mikelson, Columbia’s vice president of subadvised strategies. “Holland has a superior client service model.â€

Columbia sought Holland as a subadviser because of its disciplined and well-organized investment process and its historical performance in the large cap growth fund category. Because of its capital growth, stellar mutual fund performance, and impressive leadership, Holland Capital Management has been recognized as the 2014 Black Enterprise Financial Services Company of the Year.