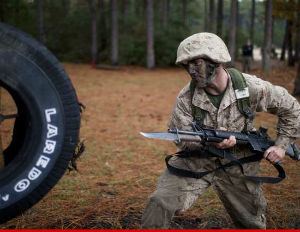 President Obama set off a minor controversy in the bayonet community when he told Mitt Romney in the third presidential debate that “we have fewer horses and bayonets, because the nature of our military’s changed.”

Though President Obama may have suggested that bayonets are becoming obsolete, Bayonet Inc., Â a military surplus outlet that specializes in bayonets, says the military still utilizes them.

According to the Marines website, every Marine is still required to learn how to use a bayonet they say “because theÂ weapon becomes just as effective [as a rifle] in close combat situations.”

Bobby Brown Arrested Again for Driving Under the Influence