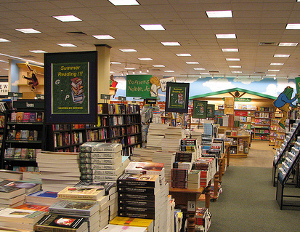 Barnes & Noble announced today that it’s planning to close between 189 and 239 stores by 2023. According to a company spokeswoman, this is on par with its usual rate of store closures and that historically, B&N closed about 15 stores per year over the last 10 years.

The largest traditional U.S. bookstore has been facing tough competition from online retailers and discounters that sell books, and has been focusing on its Nook tablet, e-book reader and e-book business for growth.

The cutbacks may be due to stiff competition from everyone ranging from Walmart to e-books. While the company has a current total of 689 locations, experts predict several of the store closures will take place in New York City where the chain holds leases at several large multi-floor spaces.

“Barnes & Noble has great real estate in prime locations and the company’s management is fully committed to the retail concept for the long term,â€ said the company spokeswoman. When asked by Crain’s NY to comment specifically on the future of the New York locations, she declined.

Rival bookseller Borders filed for backruptcy and began liquidating all its stores nationwide in 2011, after massive debt and the move to digital publications hurt the company.Â  ]Other companies that were not able to keep up with digital competition in the past decade include Tower Records, Circuit City Stores & Virgin Megastores.

Barnes & Noble’s CEO Mitchell Klipper maintains his company will always have physical locations. “You go to Barnes & Noble to forget about your everyday issues, to stay a while and relax,” he said. “When you go to Bed Bath & Beyond, you don’t sit down on the floor and curl up with your blender and your kid.”