Barbie Gets Another Makeover 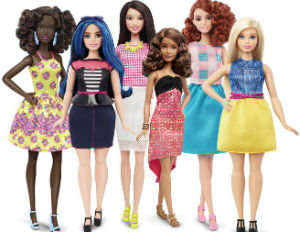 After falling sales and facing backlash for inaccurately portraying women’s bodies, toy maker giant Mattel is introducing three new body shapes–curvy, petite, and tall, for its iconic Barbie doll. The story appears on the latest cover of Time, which details the new bodies and the intention behind the biggest change in the world’s best-selling doll’s 57-year history, which speaks volumes about America’s changing beauty ideals and standards.

Starting on Thursday, Jan. 28, the new Barbie’s will be sold alongside the original busty, thin-waisted doll on Barbie.com. While the dolls will all still be called ‘Barbie’, the curvy doll represents the most drastic change, with bigger thighs, stomach, and behind. The numbers behind the brand are enormous, with an estimated 92% of American girls ages 3 to 12 owning or have owned a Barbie, which means this change will have a huge impact on the company’s sales. The change even poses a risk to Mattel, as it does $1 billion in sales across more than 150 countries annually. Barbie has a $10 price tag and has been the global symbol of beauty for generations.

Perhaps this is another step in resolving the issue of diversity, as we are seeing theÂ  “browning of America” taking place not just in the corporate world and in businesses, but also in play. After implementing new skin tones and hair textures introduced in 2015, Mattel hopes the new dolls will more closely resemble the owner.

Check out some reactions to the news from Twitter below.

The new Barbie dolls are incredible! From curvy to petite to tall to different skin tones! #TheDollEvolves pic.twitter.com/YnCPkbTJF9

The new #barbie dolls are here and better than ever! #thedollevolves #beautiful don't u think @Mattel pic.twitter.com/rAfxcsMCNg

Also, Barbie Dolls are inspiring little girls to be anything they want! #YouCanBeAnything #TheDollEvolves pic.twitter.com/nupIh2IRAS