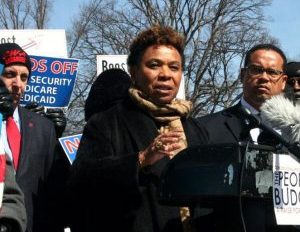 The reality star-turned-politician announced Tuesday that he has decided to choose Tillerson to fill the top government position, calling him one of “the greatest business leaders in the world,” on Twitter. That incited a storm of fury from Democrats, environmental groups, and even some Republicans.

“I am deeply troubled by Donald Trump’s decision to nominate ExxonMobil CEO Rex Tillerson to serve as our nation’s chief diplomat,”Â  Lee says, in a press release.”Donald Trump’s irresponsible selection of someone with no foreign policy experience for this post is unconscionable and dangerous,” she adds.

In the statement, the congresswoman also slammed the oil magnate for his close ties with Russia and President Vladimir Putin.

“Tillerson has a long track record of advocating for Russian interests. ExxonMobil has billions of dollars in business partnerships, with state-owned Russian companies that create clear and disqualifying conflicts of interest for this nomination. Tillerson has even received an award from Vladimir Putin himself,” she says.

“One of the greatest challenges any Secretary of State will face is addressing the crisis of climate change. Nominating the CEO of ExxonMobil for this role reinforces Donald Trump’s dangerous disregard for our planet and its inhabitants,” the statement continues.

Florida Sen. Marco Rubio has described Tillerson as “a respected businessman.” However, he added that he has “serious concerns about his nomination.” The former GOPÂ presidential candidate also pledged “a full and fair, but also thorough hearing, before the Senate Foreign Relations Committee.”

In order to prevent Tillerson’s nomination from being confirmed, three Republican senators would need to stand behind a united Democratic caucus in order to block the nomination.

How I Landed a Cool, Full-Time Job in Media

Messed Up At Work? 5 Tips to Recover From a Major Mistake