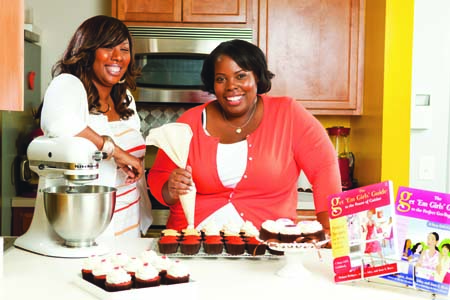 When women with a love for food, friends, and good conversation joined forces after losing their jobs following corporate restructurings, the result was satisfying and sweet, just like the cupcakes created at their New York-based company, Get ‘Em Girls Inc. (www.getemgirls.com).

Get ‘Em Girls Inc. encompasses multiple endeavors including publishing, catering, and Internet/social networking. Shakara Bridgers and Jeniece Isley are the owners and main ingredients of the business, and they have seasoned the enterprise with hard work, verve, and panache since officially incorporating in January 2008. A third partner, Joan A. Davis, left the company to pursue other interests.

In the summer of 2007, before Get ‘Em Girls officially launched, the women had already succeeded in getting their self-published cookbook, The Get ‘Em Girls’ Guide to the Power of Cuisine: Perfect Recipes for Spicing Up Your Love Life ($19.95; Simon & Schuster), into Barnes & Noble. Later that year they landed a two-book deal with publisher Simon & Schuster, with plans to release a third book in 2012.

Get ‘Em Girls Inc. promoted its books through catered events, allowing the women to showcase their cupcakes and featured cookbook recipes. That exposure, along with solid networking, helped the company secure big-name clients such as BET, MTV, Microsoft, and Louis Vuitton Moet Hennessey. “Networking and building relationships is so key to everything you do,â€ says 35-year-old Bridgers. “And if you do a good job, word of mouth spreads.â€

With a book deal and high-powered clients underneath the Get ‘Em Girls’ belt, it seemed the time was right for expansion. But business got messy when the women decided to open a cupcake shop in Harlem. Using about $90,000 that Bridgers’ mother left behind when she died of breast cancer in 2009, the women found an ideal location and set up a sublet agreement with the original leaseholder. But according to Isley, that leaseholder, who had promised to take care of everything from construction plans to contractors, ultimately dropped the ball. “We were really eager to get the process going because we wanted to be open by the summer of 2010,â€ she says. “But we went into the situation green, and he saw us coming.â€

The women say they failed to adequately research the original leaseholder before signing on the dotted line. Davis, 30, says they went solely on one reference. Consequently, they suffered a big loss. “We’ve decided all the money we put in, which was nearly everything my mother left me, is gone,â€ says Bridgers. “We hold ourselves accountable, because even if somebody lied, we allowed this to happen. So we’re going to own it.â€

They’ve since decided to open a cupcake eatery in Raleigh, North Carolina, where real estate costs are lower, there’s less competition, and the cupcake markup is generous. They’ll need about $30,000 to finance the project. “This time, we’re doing our due diligence,â€ says Isley. “We’re going to be involved in every aspect of the build-out.â€

Recognizing naivetÃ© as the root of their problem, the women say they’ll operate on good judgment versus sheer trust. “Sound business decisions are not based on hope,â€ says Isley, 34. “Having a plan that is realistic and attainable is imperative to the sustainability and growth of any business.â€ And this time they’re sticking to the plan no matter what. “If our business plan says it takes $30,000 to open and we have $28,000, we’re not doing it,â€ says Bridgers. “Many people think, ‘I’ll just pray to God for help.’ No, God gave you foresight and the common sense to know if you don’t have the money, you don’t open your store.â€

Watch Out For Business Credit Cards