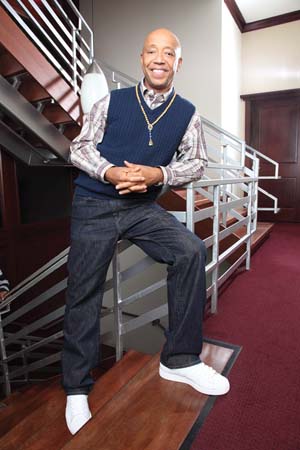 Russell Simmons is well-known as a pioneer in hip-hop and for bringing urban styles such as Phat Farm, into mainstream culture. These ventures along with MTV’s Run’s House, HBO’s Def Comedy Jam, Def Poetry Jam, and the Hip-Hop Summit Action Network have made him rich in many respects. But the yoga enthusiast and business mogul says being rich has more to do with how you live than what you have. In his new book, Super Rich: A Guide to Having it All (Gotham Books; $22.50), Simmons insists that true wealth is a spiritual matter. He encourages readers to see wealth as living a nurturing, filling, and happy life. BLACK ENTERPRISE caught up with the 53-year-old to discuss the motivation behind Super Rich, how he’s using social media to spread awareness, and why great entrepreneurs never quit.

Your new book redefines rich as a state of needing nothing, but the reality is that we are living in a recession. Folks are going to say, “Are you really in touch with what I’m going through?â€ I wrote this book because I know that a lot of us are suffering. We listen to what’s on pop culture, television or radio, or just what’s acceptable in our community. We’re not connected to our own voice. And I think that life’s journey is to go inward and to find out where the strength is. [To] work with that strength and to speed up that journey you need voices or mantras, and that’s what the book’s about–getting people to look inside. The book’s about being a good giver or contributor. “Super richâ€ is the state of needing nothing. This state of enlightenment is a blissful state. When you’re in that kind of happy state, you’re focused–there’s no noise.

How are you using media aggregator Global Grind to cover the issues that most concern you? I always keep one foot firmly in the spiritual world and one foot in the other world. I have many concerns. I’m concerned with the 10 billion suffering farm animals. I think society’s compassion can be judged by looking at how they treat their animals. It’s a big deal to me but it’s just not newsworthy. The growth of hate in this country, Islamophobia and black-on-white and white-on-black [intolerance] and anti-Semitism, it’s a concern, but it’s not newsworthy. Our philanthropic concerns are always on the site and we try to take celebrity and do good with it. We don’t write negative articles. We try to lift people up. Lots of people criticize us for what we do.

Have you ever changed direction based on the response from critics? If I learn something that’s hurtful that I’m doing, I try to get out of it as quickly as possible. Ten years ago I sold long snorkels [coats] with fur on the [hoods], but I don’t do that anymore. Now I make fake fur for the coats.

What advice do you give entrepreneurs? Every entrepreneur has to remember that you have to stay on your hustle. You can’t fail until you quit. I don’t quit very often and I would remind [entrepreneurs] that when they have a vision, to freeze it in their brain and stick with it until it’s realized.

Did you give that advice to your nieces when they started Pastry? It’s inspiring to watch [Angela and Vanessa] do the work that they’re doing. They don’t call for a lot of advice. Doesn’t seem like they need it sometimes but they’re really talented girls and very focused and for me that’s inspiring.

Will you encourage your daughters to take over this business, or would you encourage them on their own path? My daughters can do whatever they like. I’m not going to leave them a lot of money to play around with. I want them to kind of fend for themselves. They won’t suffer from poverty certainly–poverty is a mindset. I’d like to leave them a big endowment for some philanthropic or social or some political activities that could inspire them and in case they’re struggling they can come and work at the charity. But other than that, they shouldn’t have a whole lot of money. Puffy said, “More money, more problems.â€