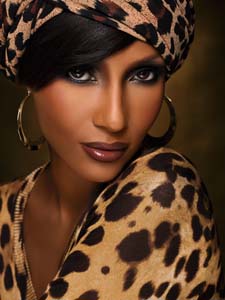 Physically flawless at 55, Iman is still best known as a supermodel. So, it might surprise people to learn that her eponymous cosmetics company is 15 years old and thriving under her watchful eye. Iman, who graced BE’s September 2006 cover with fellow supermodel-entrepreneur Tyra Banks, has begun to diversify her personal brand, recently launching fashion and home fabric collections and joining designer Isaac Mizrahi as co-host of Bravo’s The Fashion Show. Iman, a mother of two, calls Iman Cosmetics “her babyâ€ and insists that the company will be her greatest legacy.

How did modeling prepare you for your current position as a CEO?
Modeling is not just fun and flair and pretty pictures. If you want to survive as a model, you have to be a good businesswoman and understand that your pictures are your currency. So that came in handy. But as a CEO, nobody cares how I look. Now, what comes out of my mouth is my currency.

Did the industry expect you to be just a figurehead?
Yes, from the first day that I started people thought that I was just the name that they were [going to] use. I’m not only the CEO of this company, I’m also a part owner. [People thought] if you’re a model and a woman, you must not know what you’re talking about. I have no problem asking for help and men will sometimes think, “Oh, it’s so sweet that she’s asking for help.â€ But they have no idea [I’m asking] because I’ll be their competitor the next day.

Which comes more naturally to you?
It’s more natural for me to run this business. I have a mind that I’m very proud to possess and use. And, as a Somali, we’re naturally merchants.

You seem to bring extraordinary confidence to everything you do. Where does that come from?
My parents. I remember as young as 7 or 8, my mom telling me, “Always know your worth. Don’t ever settle for less.â€ So, I arrived in America at 18 years of age with that. There was a huge discrepancy between what they were paying black models and what they paid white models. I was the first black model who said, “I’m not going to do any job unless I get paid the same amount.â€

5 Situations When Itâ€™s OK to Close a Credit Card

Women-Owned Businesses On The Rise