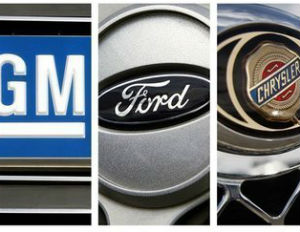 General Motors, Ford and Chrysler – known as the Big Three – have endured some rough times before, but nothing like the situation they faced in the fall of 2008; the first black president was elected and their chief executives were pleading with Washington for help. Ford had saved for the hard times, but General Motors and Chrysler both ended up filing for bankruptcy after receiving around $80 billion in government aid. Other car companies including Nissan and newcomer Tesla, as well as Finland-based dealer Fisker, received loans from America. Like all corporate overhauls, the auto bailout actually created
countless job cuts in the US.

Decoded takes a look at where they are now.

GM asked for $18 billion in loans, of which $4 billion was needed to avoid bankruptcy. The company has repaid $23.1 billion of the $49.5 billion, including all of its outstanding loans but the government still owns 500 million shares, or 32%, of GM stock. With such a great relationship with the American government, GM sold close to 20,000 cars and SUVs – worth $409.2 million – Â to the government alone in 2012.

Brands like Chevrolet, Cadillac and GMC were folded into the new company, renamed the General Motors Company. And oddly enough the GM Company since the bailout is becoming an international powerhouse in automotive manufacturing, investing $450
million in a new plant in Argentina, over $1 billion in a plant in China, $500 million in Brazil, $200 million in Thailand, $540 million in Mexico and another $150 million in Indonesia.

The company – the only one of the Big Three not to receive a bailout – feared a collapse of GM and Chrysler at the time would have hurt suppliers and, in turn, Ford itself. Their CEO asked Congress for a “credit lineâ€ of up to $9 billion in case the economy worsened.
They pledged to add 12,000 hourly jobs in the U.S. by 2015.

According to a Wall Street Journal article, Ford made $3150 on every vehicle it
produced in North America during the first quarter of 2012, operating profits rose 16% to $2.1 billion. Ford made $800 million more than GM despite the fact that it has a smaller market share and has major debt-service costs that GM doesn’t because its bailout from Uncle Sam came in the form of equity, not a loan.

In 2009, the Obama administration forced Chrysler into bankruptcy, pumped in $10 billion and put it under the control of the Italian automaker, Fiat, with the UAW Union as its biggest shareholder. Since then, Chrysler has gained traction with several new and revamped models, which helped increase its sales in the United States.

The smallest of the Big Three U.S. automakers appears poised for a comeback less than two years after the government saved it from extinction. Chrysler made a $569 million net profit in 2010 and has $10 billion in hand. Just last year, Chrysler invested $238 million at
engine plants in Detroit and its suburb, Trenton, Mich., and added a third shift at a pickup truck factory in nearby Warren, Mich. The company has seen year-over-year sales increases, bringing close to twenty new vehicles to the market including the tiny Fiat 500.

Nissan received a $1.4 billion loan to build a battery plant and modify an existing car factory in Tennessee; and to produce the electric Nissan Leaf, imported from Japan. Production of battery packs begins at the end of September. Though it has sold only 14,000 Leafs in the U.S. since 2010, the company hasn’t backed off its U.S. sales
target of 150,000 Leafs per year. A spokesman says Nissan will start repaying its loan after U.S. production begins.

Fisker received only $193 million of its $529 million requests because of missed milestones. Its first plug-in hybrid, the $100,000 Karma built in Finland, suffered quality problems. Its next model, the Nina, and a new factory in Delaware, are on hold while the company sorts out its problems and seeks alternative funding sources.

Tech Startup of the Week: Stipple Brings Photos to Life Through Tagging