At Brooklyn Museum, an Artist's Dissonance Has a Rapt Audience 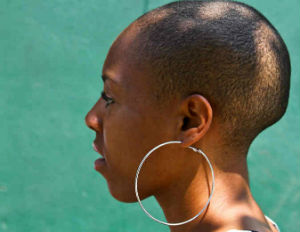 It’s about 9 p.m. on a recent weeknight at a newly-opened watering hole in a trendy Crown Heights, Brooklyn neighborhood the newly-arrived have begun to call Crow Hill, and the artist Gabrielle Watson is in a nook reading at the bar. The renaming of the neighborhood hasÂ commenced for no other reason than to anger longtime residents; ironically, a karaoke night has broken out: tipsy male Juilliard dropouts are belting out Ne-Yo and BeyoncÃ© tunes as we talk.

“It was quiet when I got here,” she said, politely.

We are there to talk about her art.Â Watson was one of over 1,700 Brooklyn-based artists that opened their private studios to the public early last fall. The community was encouraged to vote on their favorite artists to be featured in a special exhibit in the museum from Dec. 1 to Feb. 24. In addition to Watson, the exhibitionÂ and the public selected Adrian Coleman, Oliver Jeffers, Naomi Safran-Hon and Yeon Ji Yoo.

As we began asking questions, we asked what she was reading. Her visage, serious but with a warm, encompassing smile and a closely cropped haircut, seemed to offer a few clues; surely you’d figure she was reading something serious and sad, like Zadie Smith or political and confronting like Patricia Hill Collins. Nope. She was readingÂ Tales of a Shaman’s Apprentice: An Ethnobotanist Searches for New Medicines in the Amazon Rain Forest. And she was into it.

Her reading choice, in this case, is representative of the mission of her art, which imagines black subjects free from political context, strife and oppression of every kind. Watson, an attorney, talked about her surprise at being selected, the politics of an unpolitical art process and finding beauty and community amid the many artistic voices of Brooklyn.

BE.com: Do you find people are expecting some kind of political pretext to your pieces? I ask this because I think most people might assume if there’s a young, black artist out there making a name for themselves, then they must be preoccupied with race or some social issue that drives them and inspires them to create.

G.W.: It’s certainly what’s out there. I hope that people aren’t expecting that from me. I don’t wake up everyday feeling oppressed. I think it really affects how you feel about life and what you do with your life.

How did you find your artistic style?

And it definitely changes. Color can change depending on what type of mood I’m in. Depending on where I am in my life color can be a lot more muted or muddier. At other times they can just be ridiculously bright.

Really, dignity? Dignity is one of those ‘black’ words.

No, well, I know you hate that, but I think there’s context, and that, your work treats its subjects as whole, fully realized people. That are black.

You get a greater sense of who that person is.

I can agree with that because most of my subjects are people that I know very well. In some cases people I’ve been intimate with. So there definitely is a connection between me and that person. The photos that I chose, are indicative of who they were as a person. So that just comes out. What made you enter the contest?

I just decided to do it. I just did it never with the intention of getting to the Brooklyn Museum at all. I wanted to do it more as a first step in my art career. No one was more shocked than I was that I was a finalist. So it was very, very quick.

When you started this process, you obviously could have imagined winning, right?

No. [Laughs.] Everyone else did. But if you look at my profile and the way I set up my page I have this crazy wig on. My pictures weren’t edited the best they could have been … it just wasn’t the best presentation. I had no intention of winning or anyone really giving me a second look. So I think that’s one lesson that I take away from this is to always put your best foot forward. People have always said, ‘Oh, your work is good!’ But I don’t think that’s any different from looking in a mirror. Someone might tell you that you’re attractive, but when you look in the mirror you don’t really see any of that. It’s hard to gauge what the outside perspective is. So my work … is a part of me. It was hard for me to see it from another perspective.

What was the feedback from the judges?

I got a visit from the curators and we talked about my word. They gave me a lot of direction in terms of where I should go, more like suggestions. It was almost analogous to sitting in therapy. When you’re talking to a therapist they never really tell you what you should do. Their questions are meant to guide you and give you more things to think about.

How’s the experience changed you? Do you feel you have more confidence as an artist?

It just showed me that this avenue is possible, something that I should be doing with my life. It’s not so much confidence. Because people’s perception of you and your work can be so subjective. For people to place value on my work … that could go away. It’s very possible that it could go away anytime. The value and what I get out of it happens during the process, not after everything is done. I really get value in sitting there, meditating and doing what I’m doing when I’m sitting there in front of the canvas. I’d be devastated if that were to be ever taken away from me. Now, I’m happy that people are receiving it the way they are, but that’s not what I’m after. Are you inspired by Brooklyn? I think it might be easy to get lost as an artist with this perception of Brooklyn as a cultural center of the world.

Brooklyn definitely inspires. I talk shit about Brooklyn all the time because everyone is trying to stand out but at the same time there’s so many creative people around: artists, musicians, performers … I’ve drawn them. But I can’t think of any other place in the world I’d rather do this. I could but I’m not going to get the same concentration of people of color and the diversity you get here. I’m grateful for that.

Brooklyn Museum is a force culturally, too. What sets it apart for you?

Before any of this happened I liked the museum and I felt a connection to it. It’s a staple in the community. I really, really liked them when they started this project because I don’t think I’d seen an institution do community outreach to this magnitude, and in this way by trying to build bridges with local artists. They also just made the entire process entirely transparent. In the traditional art world things are done behind closed doors. So knowing what the process of getting into a museum looks like is unknown.

Have you given any thought to just becoming an artist full time? If so is it an intimidating prospect?

That’s always been the goal. And no. I’m looking forward to it … as soon as possible. [Laughs.] Even as a lawyer that jumps from project to project; there would be weeks during the recession; there would be months where I would go without work, so there was a lot of pressure. But with being an artist full time, it’s not something I think about. And besides, if it doesn’t work out I have a really good backup plan.

Higher Ed Hustle: Four Advantages of Working While in College