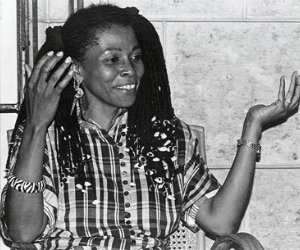 Assata Shakur is on the wrong side of history by becoming the first woman placed on the FBI’s Most Wanted Terrorist list.

In addition to being placed on the terrorist list, there is a $2 million dollar reward for Joanne Chesimard aka Assata Shakur, who was a member of the Black Liberation Army, in 1973 when she was accused of killing state trooper Werner Foerster. The New Jersey State Police says it was Shakur who shot Foerster twice in the head, killing him.

Shakur was convicted in 1977 of the 1973 murder that took place during a routine traffic stop. She escaped fromÂ a New Jersey prison in 1979 and has been living in Cuba since 1984 with political asylum.

Special Agent Aaron Ford says, “She is a domestic terrorist who murdered a law enforcement officer execution style. And while we can’t right the wrongs of the past, we can and will continue to pursue justice no matter how long it takes.â€

Read the full story on AllHipHop