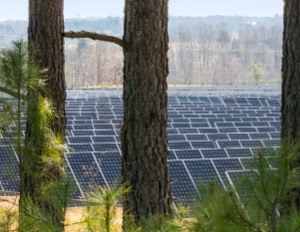 On Earth Day, Apple updated its Environmental Responsibility page with a slew of new information showing how the company has improved over the last decade in terms of its reliance on fossil fuels and renewable energy, among other metrics.

The tech company is also pushing its message of environmentalism as well as taking some shots at the competition, ironically, with newspapers, according to 9to5Mac.

In newspaper advertisements, Apple’s dedication to environmentalism is both an ad showing the company’s improvement over the last decade, as well as a thinly veiled stab at rival companies copying Apple’s design and patents, namely Samsung. “There are some ideas we want every company to copy,” the ad reads.

On the face of it, the sentence is referencing Apple’s vision of a company powered completely by renewable energy, but the subtext is a little more complex.

Apple and Samsung are currently involved in a patent lawsuit where Apple claims the Korean company knocked off a multitude of its ideas, including the “slide to unlock” feature found on the first iPhone. In 2012, Samsung lost its first patent lawsuit with Apple, and was made to pay $1 billion in damages to the company.

With this second trial, Apple wants to prove that more of Samsung’s devices violated five of Apple’s patents. Even if Samsung were banned from selling the devices, most of the models in the trial are already out of date and have been replaced with updated versions.