Applebee's Waitress Fired For Sharing I Give God 10% Tip Receipt 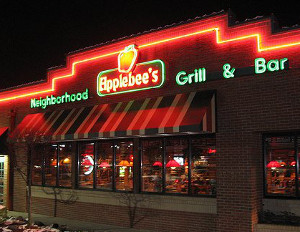 The Huffington Post reports that earlier this week, an Applebee’s waitress posted a photo on Reddit of a receipt from an alleged pastor who, instead of leaving the suggested 18 percent tip, wrote “I give God 10%, why should you get 18.â€ Now, after the bill went viral, Applebee’s has fired the waitress.

I thought the note was insulting, but it was also comical,” said the waitress, whose first name is Chelsea,. “I posted it to Reddit because I thought other users would find it entertaining.”

While many online were appalled at the Pastor’s behavior, Applebee’s was not happy with the waitresses decision to post the receipt and promptly fired her. In a printed statement Applebee’s spokesperson Dan Smith wrote:

“Our Guests’ personal information — including their meal check — is private, and neither Applebee’s nor its franchisees have a right to share this information publicly. We value our Guests’ trust above all else. Our franchisee has apologized to the Guest and has taken disciplinary action with the Team Member for violating their Guest’s right to privacy. This individual is no longer employed by the franchisee.â€

This is not the first time a receipt has cost someone their job. Check out this gallery of offensive receipts and the stories behind them.

Be Warned: 5 Workplace Elements That Could Be Sabotaging Your Career

Cornel West: The Building of a Black Intellectual Empire