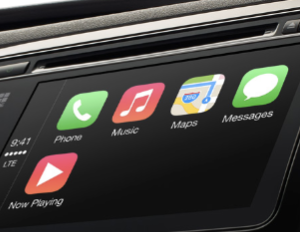 If you remember the introduction of iOS 7, you’ll no doubt remember its reception. In a word, it was bad. Its aesthetics were roundly panned, with many complaining about the garish design elements, while others lamenting over things simply not working properly.

There have been very minor changes in the last few incremental updates, but none that really address the aesthetic overtones of the software.

Simple annoyances like the confusing Shift key and updated repeat and shuffle buttons in the Music app have been addressed. Larger bugs, like random shutdowns and reboots as reported by various iOS users, have been squashed as well, making this an overall more pleasant experience.

The update also brings with it CarPlay support, announced earlier this month. With CarPlay (formerly iOS in the Car) drivers can control the music, use Apple’s Maps app for GPS directions, send text messages, and make phone calls from the dashboard screen in their automobile.

It’s unavailable on your current automobile, but companies like Ferrari and Volvo plan to debut it in their 2014 models this year, with other manufacturers like Ford soon to follow.

It’s been a long time coming for this pretty important update. Developers have had it since November of last year, and the last beta release was in February, according to MacRumors.

A word of warning for those users who jailbroke their iOS device to run unauthorized tweaks and apps: this update will once again break your software modifications and patch the various exploits that made it possible.

If that doesn’t bother you, you can run the iOS update from the Settings app in your device, or plug it in your PC or Mac and let iTunes update it for you.

Sony’s Jack Tretton to Step Down Next Month