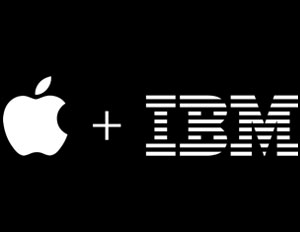 The partnership between Apple and IBM is surprising, given how much Steve Jobs lambasted the enterprise company during his tenure at Apple. (Image credit: Apple)

On Tuesday, July 15,Â  Apple announced a partnership between itself and IBM, its former rival in the PC industry. The agreement will let IBM’s expertise in the business marketplace and its focus on analytics and data management augment Apple’s iOS devices, making them better suited for business and enterprise situations.

The partnership will allow businesses to use iOS devices easily thanks to IBM’s management services, allowing IT departments to quickly set up and distribute iPhones and iPads instead of the obsolete icon of business: the BlackBerry. Its main initiative is called MobileFirst for iOS Solutions, and will focus on developing “made-for-business apps” for companies. They’ll be bundled with 24/7 tech support from Apple and IBM.

So if IBM and Apple team up, someone must be feeling the pain, right? Well, companies like Google, BlackBerry, and Samsung should be worried. IBM’s specialty is enterprise software and analytics, something Apple’s consumer-branded face isn’t suited for. But Apple’s products are by and large the most desirable and most widely used, especially in the tablet market. Google does have business offerings, and Samsung Knox is useful for enterprise-level security, but that’s about it.

What makes the deal somewhat surprising is the history that the two companies have with each other. Apple and IBM were once bitter rivals, with a history that involved both partnerships and brutal spats in a then-emerging personal computer industry. But IBM sold its PC division in 2004 to Chinese company Lenovo, and focused on offering its enterprise services to businesses since.

“IPhone and iPad are the best mobile devices in the world and have transformed the way people work with over 98 percent of the Fortune 500 and over 92 percent of the Global 500 using iOS devices in their business today,â€ said Tim Cook, Apple’s CEO. “For the first time ever we’re putting IBM’s renowned big data analytics at iOS users’ fingertips, which opens up a large market opportunity for Apple. This is a radical step for enterprise and something that only Apple and IBM can deliver.â€