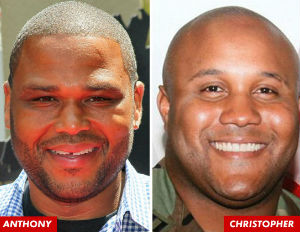 After any major news story or tragic massacre, Hollywood is known to come together and recount the morbid events. In the case of the deceased killer Christopher Dorner, Anthony Anderson has readily stepped to the plate.

While leaving Mastro’s restaurant in Los Angeles, CA, TMZ stopped the Guys With Kids actor–seen leaving the venue with Don Cheadle and George Lopez–to ask if he’d ever be interested in playing Dorner in a film about his life and the fatal events that led to his death.

Anderson told the media outlet, “I’m always up for a good role, brother.”

The TMZ rep then asked if he thought it would be possible to make a good script for such a story, but the comedian uncomfortably replied, “I have no idea.â€

Wal-Mart: Small Business Are Hurting, too