What's The Answer to Extreme Academic Segregation in NYC? 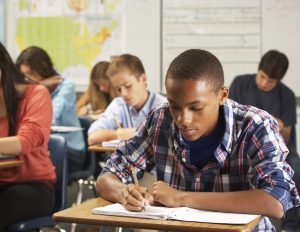 It isn’t hard to predict how this academic sorting breaks down along racial lines.

In an effort to provide quality education for all, there is a movement to reduce the number of schools that screen their incoming students. Those schools admit students based on their academic history or test results.

Unfortunately, in a city where 70% of the student body is black and brown, only about 4% of seats at those high-performing schools went to black students (6% went to Hispanic students).

Is the answer to reduce the number of schools that screen top-performing students?

Screens “are designed to privilege and preference white and middle class students,â€ Â Matt Gonzales, school diversity project director for New York Appleseed and an advocate of school integration, was quoted saying in the article. “If we’re just thinking about it plainly, screens are a function of exclusion for black and brown and low-income kids.â€

A Small Band of Blue

What struck me most, though, about the photo accompanying the article was the small band of blue that represented the number of kids at the “badâ€ school that had scored a three or four–high scores–on the eighth-grade math test.

These kids–probably low income, probably kids of color–somehow had the resilience, determination, and single mindedness to excel in a lackluster environment where little may have been expected of them.

Shouldn’t there be a high-performing high school for these youngsters to test into?

Instead of eliminating high-performing, test-admission schools, what about modifying their admissions criteria to set aside seats for lower-scoring students, who, nevertheless, have the means to succeed, but haven’t had the educational opportunity to prepare them to ace such a test?

And speaking of screening, what about screening at a much younger age? I’ve read about a group in Chicago that works with low-income mothers, sharing with them how to read and talk to their babies. Early screening may be a means of providing extra stimulation and guidance to low-income parents, which could yield dividends when their kids reach eighth grade.

Finally, we need to raise the academic bar in the lower grades. Everyone knows that a public school A is a private school C. Let’s start teaching to high standards in grades pre-K to eighth grade .

To read more, go to Chalkbeat.