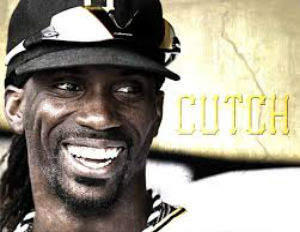 Andrew McCutchen is the first Pirates player to win the MVP award since Barry Bonds in 1992.

Major League Baseball outfielder Andrew McCutchen on Thursday became the first Pittsburgh Pirates player to win the National League Most Valuable Player Award since Barry Bonds in 1992. The Baseball Writers Association of American announced McCutchen won in a landslide; he was named first on 28 of 30 ballots.

“Pittsburgh center fielder Andrew McCutchen, whose all-around play helped the Pirates reach postseason play for the first time in 21 years, was elected the National League Most Valuable Player in balloting by the BBWAA that was announced on MLB Network,” read a statement from the BBWAA.

Being named alongside Pirates greats such as Stargell, Roberto Clemente and Dave Parker, was not lost on the 27-year-old star.

“That’s unbelievable to be even mentioned in that,â€ McCutchen said during a press conference at PNC Park. “To be a part of that elite group, it’s going to go in the history books and be there for years to come for people to look back at.â€

On eBay, bids on McCutchen’s rookie card had reached $131.

In relative terms, McCutchen’s contract is a steal for the small-market Pirates. In March of 2012, McCutchen signed a six-year, $51.5 million deal — MLB.com called it the second-richest contract in Pirates’ history. He owned a .317 batting average this year, with a stellar .404 on-base percentage and .508 slugging percentage. He also stole a team-high 27 bases.

According to the fangraphs.com, McCutchen led the National League in WAR with 8.2. WAR — wins above replacement — measures how much more valuable a given player is against a theoretical average player. The number assesses a value by applying a number of wins McCutchen provides with his contribution.

“I went into this past offseason just going in and saying, I’m going to continue to keep doing the same thing, not changing anything,” McCutchen said. “Just trying to excel, get a little better. I’ve continued to do those same things and tried to improve base running and all that.”

Late Thursday, the congratulatory tweets were already coming in. “Congrats to my teammate @MiguelCabrera and Andrew McCutchen on winning the MVP award in their respective league,” said Torii Hunter, who has been vocal about the lack of African American players in baseball. “Well deserved!!”

“Words cannot describe how overjoyed I am at winning the National League MVP this year. It is truly an honor to be able to represent this franchise and the city of Pittsburgh with this award. I want to thank my teammates and coaches, the organization, and Pirates fans everywhere for the amazing support I have received this past year.”

“Awards such as the MVP only come with great teamwork and leadership. That is evidenced by Clint Hurdle winning Manager of the Year as well. While I will savor this award forever, this only makes me more hungry to bring a World Series championship back to Pittsburgh. It is my promise that I will continue to work hard to improve on and off the field, and I hope I can provide a positive example for youth everywhere.”

In 2012, McCutchen finished third in the voting. He appeared on the cover of MLB ’13 The Show.

Going Global With Your Business? Here Are The Steps to Achieve It

5 Keys to Consider When Thinking About Buying a Franchise