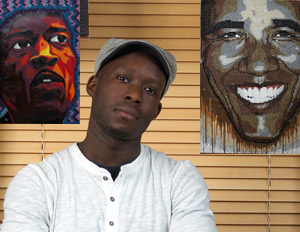 Born in Jamaica and raised in Morristown, NJ, Andre Woolery had only one thing in mind when he entered Duke University‘s brick walkways: major in computer science and make his parents proud. But, like most college students, his dreams changed long before he walked across the stage at Duke’s Wallace Wade Stadium. “I basically told my parents, ‘I’m going to change directions, and I want to work in advertising. I want to do something a little more fun,’â€ says Woolery of his decision to switch his career focus.

After graduation in the summer of 2003, Woolery got hired as an Assistant Media Planner at New York advertising firm Kirshenbaum Bond Senecal + Partners [KBS+P]. But understanding that the “digital [world] was emerging,â€ he started taking night courses headed by art and creative directors, and soon developed an interest in graphic design. Nine years later, Woolery is now the Associate Digital Director of KBS+P, representing clients such as TD Ameritrade and Kodak. “My role is basically finding interesting ways to use digital technology to build a brand [and] build campaigns,â€ he explains.

Despite his ascension up the corporate ladder, Woolery felt his creative energy wasn’t being fully utilized. Not wanting to be someone who got “trapped by his paycheck,â€ Woolery decided to save up some money and take a month of unpaid vacation to further explore his imagination and relish in his untapped artistic side. “I’ve been spending so much time doing things for other people, trying a whole bunch of different things, having a whole bunch of different ideas, and never spending the actual time to see how it all panned out,â€ he says. “I knew I was going to get an unpaid month off, but I realized in the grand scheme of my entire life, one month of not getting a paycheck is really nothing and ultimately it paid off really well.â€ During his month off, Woolery started a self-titled blog that documented his day-to-day outside of the work force, and life as a “starving artist.â€ He tapped into his creativity by pinning portraits of artists together out of thumbtacks. Through that may seem odd and unexpected, the Jamaican-bred artist created ineffable artwork of notable figures ranging from Jay-Z, and Kanye West to Jimi Hendrix and President Obama. He even made political statements, tacking together a 100-dollar bill that read, “United Slaves of America.â€ These tactful images are part of a series he titled the 2011 Mixtape. In addition to these signature pieces, Woolery also crafted more formal paintings of other people of note like Michael Jackson, Muhammad Ali, Erykah Badu, and Bob Marley.

Stepping out on faith appears to have worked for Woolery. While the profits of his artwork may not be equivalent to his bi-weekly salary, the return on investment for his creativity is quite high. With his pieces ranging in price from $35 to $7,000, Woolery is looking forward to his first solo exhibition this February 23rd at Frontrunner Gallery in New York and expanding his clientele. “I’ve been operating pretty much under the radar, and then once I’ve released these pieces it’s like kind of a turning point for me where a lot of people just started to reach out,â€ he says. “I’m getting more into the art world, and once you get connected into the art world then you get connected more into the collectors and that’s when you start to get all types of different clientele. It’s just a matter of time.â€

Click here to view a photo gallery of Woolery’s most memorable pieces.

How I Did It: Entrepreneur Takes Passion for Baubles to the Bank