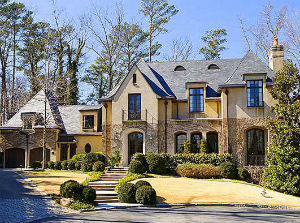 TMZ is reporting that the Atlanta mansion of former NBA star Allen Iverson has been sold in a foreclosure auction.

TMZ says Iverson defaulted on aÂ $1.2 million mortgage which sent the $4.5 million home into foreclosure. TMZ reported in December that Iverson tried to fight off the sale, but that he “quickly filed a lawsuit against the lender that’s trying to take the home, claiming he never consented to the loan.”