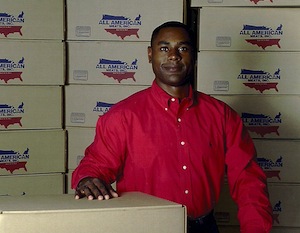 This week on The Urban Business Roundtable, UBR Contributor Dwyaine Betts Jr. talks with Shawn Buchanan, the president and CEO of Omaha, Nebraska-based All American Meats Inc., one of the nation’s largest Black-owned businesses. With 2011 revenues of $40 million, All American Meats is ranked No. 69 on the Black Enterprise 100s list of the nation’s largest Black-owned industrial/service companies.

A former professional baseball player–he played the outfield for his hometown Chicago White Sox–Buchanan began planning for his career after pro sports as a business manager at Nebraska Beef, a beef processing company. When he retired from baseball in 1996, he launched All American Meats. Within five years, Buchanan made his presence as an entrepreneur, earning a Black Enteprise Small Business Award in 2000. He’s also earned special recognition for the U.S. Department of Agriculture, among other industry awards.

Also, UBR Contributor Samantha Pass talks with Stacia Pierce, founder and CEO of LifeCoach2Women.com, about how to emotionally recover from episodes of failure. Pierce is founder of the International Women’s Success Conference, which has attracted thousands of women annually over most of the past two decades. She’s also an entrepreneur, including owning an online jewelry store, StyleShoppe.com.

In my “Alfred’s Notepad” segment, I talk about the value of judging business plan competitions as a way to not only provide capital and support promising ventures, but to identify young entrepreneurs and rising stars in business–maybe even the next Steve Jobs, Oprah Winfrey or Reginald F. Lewis. My philosophy: Be nice to ’em now, because they’ll be running things later.

SAVE THE DATE for the 2013 Black Enterprise Entrepreneurs Conference + Expo hosted by Nationwide, May 15-18, at Columbus Convention Center in Columbus, Ohio. Expect innovative sessions, high-powered speakers, and an early peek at the products, trends, and services you’ll need to stay ahead of the curve. Nominate your company or an outstanding entrepreneur in your network for our Small Business Awards! Also don’t miss the chance to enter our Elevator Pitch Competition to compete for $10,000 for your business. To find out more, visit dev.blackenterprise.com/ec/

Optometry and Elegance: Revitializing the Look of Eye Glasses

The Importance of Communities, Mentors in Our Youth’s Lives