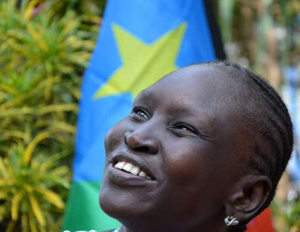 Alek Wek fled to Britain with her family at 14 to escape the first civil war in the Sudan. By her early twenties, she was a supermodel and muse who had become the first African woman to grace the cover of ELLE. Wek’s prestigious modeling career has taken her around the world, but she hadn’t been to her homeland in years. That changed when she visited the South Sudan for the nation’s one-year independence anniversary in July.

Wek teamed up with the United Nations High Commissioner for Refugees (UNHCR) to help the South Sudan develop economic and agricultural stability. Now one of the world’s youngest nations, the South Sudan faces several challenges because of fighting at the border (stemming from the second civil war, which ended in 2005), climate issues which can make land unlivable, and lack of resources including food, water and education. Also, about 175,000 refugees who returned to South Sudan still need resources to help them sustain themselves as well as build a stable infrastructure for their nation.

The supermodel, who detailed her life story in her 2007 memoir Alek: From Sudanese Refugee to International Supermodel ($13.99; Amistad), is hopeful that her country will emerge triumphant despite its challenges. “I’ve never forgotten what it was like to be displaced and leaving your own country, but I believe as human beings, if we take the time, we really can make a huge impact in so many people’s lives that are less fortunate,â€ says Wek, who draws motivation for success from her own experiences. “We all can collectively come together and make a tremendous amount of difference whether you’re a doctor, lawyer, teacher or whatever industry you chose to be in.â€

Wek visited Wau, her hometown, Juba, the capital city, and various other regions of the South Sudan where she got to speak to displaced people and convey their needs to the country’s president, who is putting his faith in the youth, some of whom were born elsewhere because their parents fled.

“My nephew, who was raised in England, was working at a huge telecommunications company and quit his job. He now resides in South Sudan where he’s setting up his business in Juba,â€ Wek says. “We need all the younger entrepreneurs because they’re the new vision that learned from what their parents have gone through.â€

Wek, who lights up when she describes education as “everything,â€ learned from her parents at an early age to make acquiring and applying knowledge her top priority–it’s a message she consistently spreads, which is why she teamed up with UNHCR to help build schools, one of the most important things she feels the South Sudan needs.

“I learned a lot from my mother [a businesswoman], and the most important lesson in education was my father saying not just the boys–but my girls are gonna be educated, and whatever you enjoy you better focus and you better follow through,â€ says Wek, who visited schools throughout the Sudan and often does Skype sessions with school children when she can’t be physically present in the country. “So that helped guide me to make proper decisions and I saw myself in those children.â€

Oprah once told Alek Wek that had she seen her on the cover of a fashion magazine as a child, her own concept about herself would be different. Imagine how the Sudanese children feel, who see Alek Wek, the model, the entrepreneur and humanitarian. Wek jokingly says that her Dinka heritage makes her tenacious but she has witnessed people coming back from various clans andÂ the fact that she was embraced by the people in her country after years of being away, as if she never left, speaks volumes to Wek’s hopefulness and the resilience of the South Sudanese people.

“I see so much potential and I think especially now with independence it’s just a stamp for people to finally start rebuilding,â€ she says. “If people really achieve the potential—not just of the country itself, but just the people—I think a lot of people will get involved much more and that’s why I have such a passion for South Sudan. I really root for them.â€