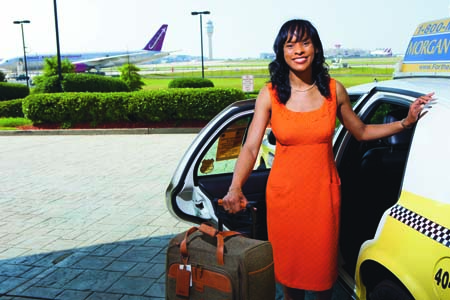 Philippa V. Ellis logs 60,000 to 80,000 miles per year in air travel as a partner with the Atlanta-based law firm Owen, Gleaton, Egan, Jones & Sweeney, L.L.P. She also enjoys jet-setting to international destinations such as Italy and France with her family. The frequent flier was pleased to learn about the new airline regulations aimed at protecting consumers. “I see the updated legislation as evidence that we have someone in the White House who has his ear to the ground,â€ Ellis says.

As the summer travel season jumps into full swing, updated passenger rights are going into effect. The initial tarmac delay rule, called Enhancing Airline Passenger Protections, went into effect on April 29, 2010.Â  Ellis benefited from this rule recently when her flight was delayed for more than two hours, and passengers were allowed to deplane. The latest rule was published on April 25, with the majority of the provisions going into effect on Aug. 23.

“U.S. Secretary of Transportation Ray LaHood believes strongly that airline passengers have rights and that we need to ensure that airlines live up to their obligation to treat their customers fairly,â€ states Bill Mosley, public affairs specialist for the Department of Transportation. Some of the new requirements according to the DOT include:

“Airline passenger rights were introduced when there was tremendous outcry from the flying public after my family and more than 13,000 others were stuck on tarmacs in 138 planes all over Texas on Dec. 29, 2006,â€ says Kate Hanni, director of FlyersRights.org, a consumer advocacy organization. “Planes sat for hours on the tarmac with overflowing toilets, no water, no food, babies screaming, no air conditioning, and diabetics in shock.â€

The new legislation requires airlines to update travelers every 30 minutes if a flight has been on the tarmac for at least 30 minutes past its scheduled departure. After two hours, individuals must be given food, water, and other basic essentials. After three hours, fliers can get off domestic flights.

The newest passenger rights were instituted because consumers suggested additional protections that were not included in the first rule.

If you feel that your rights have been violated or have additional questions about the new rules, go to the DOT’s Office of Aviation Enforcement and Proceedings website, http://airconsumer.dot.gov. You can also go to www.flyersrights.org.