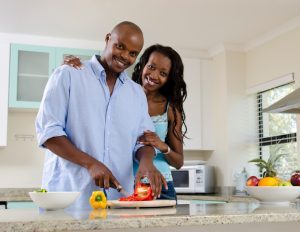 I don’t usually stay up late to watch TV, but last night, at my husband’s suggestion, we watched the journalist Bob Herbert’s documentary Against All Odds. The film draws a straight line between the persistent discrimination most African Americans historically experienced and the low wealth in the black community today–despite there being millions of black Americans in the middle class.

Although in my work at Black Enterprise I already knewÂ about the stark racial disparities in wealth and know much about this country’s painful history of racial hatred, Herbert’s documentary is compelling viewing. It clearly shows how policies were intentionally and systematically structured to keep black Americans in a prescribed low caste.

Marc Morial, president of the National Urban League, describes in the film how only menial jobs were open to most black people, and how culture and custom worked to relegate them to a “servant class.â€

Although Herbert’s film examines the historical basis for low black wealth, it also looks at contemporary politics, and how no politician would today say “nigger, nigger, niggerâ€ as a way of connecting to his base. Today, that reprehensible language is instead rendered as “tax cuts,â€ according to infamous words uttered by Lee Atwater, a political strategist and adviser to Ronald Reagan and George H.W. Bush.

Herbert also notes how black people with incomes that qualified them for conventional mortgages were steered into the subprime market, losing much of their wealth in the Great Recession. In other words, economic discrimination is a current event, not just history, for black Americans.

The two pillars of middle-class life are employment and housing, Herbert says in the film. On both fronts, black people were systematically excluded.

Jack Macnamara, a Jesuit priest and activist who researched the contract selling of homes to black homeowners in Chicago in the 1960s (they bought “on contractâ€ because they could not get mortgages) says in the film that “$500 million was legally stolen from the black community in Chicago alone during the period from 1940 to 1970.â€

Beryl Satter, author of Family Properties: How the Struggle Over Race and Real Estate Transformed Chicago and Urban America, notes how whites and blacks both wanted the same thing: to save money and buy and invest in property.

She says whites “were rewarded with property appreciation and a sense of stability,â€ but blacks were punished. By pursuing the very goals that should have helped them to establish an economic foundation, they were lured into a “trap that ended up draining them of wealth instead of helping them to build wealth,â€ Satter says.

Watch Against All Odds here. It is heartbreaking, but it will make you think.