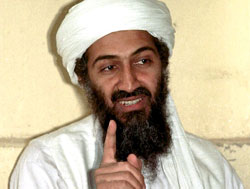 President Obama‘s calm and cool demeanor has always sort of puzzled people–especially his detractors who mistake it for aloofness or not caring. On Monday, however, following the announcement that Osama bin Laden had been captured and killed Sunday afternoon, those same critics may have privately marveled over the president’s ability to go about his regular routine while keeping an enormous secret.

Obama gave the all systems go to the mission to take down Bin Laden on Friday. He then traveled to Alabama to survey tornado damage and then to Cape Canaveral, where he met with Rep. Gabrielle Giffords. The next night he regaled attendees at the Washington Correspondents Dinner with his jokes and actually laughed at a Bin Laden joke made by comedian Seth Meyers, who quipped, “People think Bin Laden is hiding in the Hindu Kush, but did you know that every day from 4 to 5 he hosts a show on C-SPAN?â€ He even spent part of Sunday on the links, never giving the slightest hint that a mission with enormous political implications was about to take place.

But as John Brennan, Obama’s counterterrorism expert explained during a press briefing Monday afternoon, as the president and other administration officials watched the event unfold in real time, they were filled with anxiety and “the minutes passed like days.â€ Obama was generally concerned about the Navy SEALs who’d been sent to Pakistan to fulfill the mission, and even more so when the problem with the helicopter occurred and again when the SEALs were preparing to leave and the Pakistani government started scrambling their jets.

“It was clearly very tense; a lot of people holding their breath. And there was a fair degree of silence as it progressed, as we would get the updates,â€ Brennan explained. “There was a tremendous sigh of relief that what we believed and who we believed was in that compound actually was in that compound and was found. And the president was relieved once we had our people and those remains off target.â€

Both Republican and Democratic lawmakers have responded positively to the news of Bin Laden’s demise. Most praised the president’s actions but also cautioned that the war on terror hasn’t ended.

“Congratulations to President Obama and his National Security Team for the capture and killing of the world’s most dangerous and evil criminal mastermind, Osama bin Laden. Although this is a time of exuberance, rejoicing and healing, America, as well as our allies, must be vigilant and on guard for retaliatory attacks from the extreme Islamic world,â€ said Rep. Allen West (R-Florida), who served in the military for many years. “What strongly concerns me is that Bin Laden was not found hiding in a remote cave, but in an urban area of Pakistan where the Pakistan army’s premier training institution operates. This is a war that is nowhere close to being over.â€

West is not the only one wondering how Bin Laden was able to live an opulent life in a Pakistan compound not very far from a major military installation.

“People have been referring to this as hiding in plain sight. Clearly this was something that was considered as a possibility,â€ Brennan said. “Pakistan is a large country. We are looking right now at how he was able to hold out there for so long and whether or not there was any type of support system within Pakistan that allowed him to stay there.â€ Brennan was unwilling to speculate about whether any of that support came from the Pakistani government.

“The death of Osama bin Laden marks the most significant accomplishment yet in the war against Al Qaeda. I commend the work of the U.S. Armed Forces and intelligence community for finding the world’s most wanted terrorist. I also wish to recognize President Obama for his decisive leadership as Commander in Chief. Today my thoughts are with the families of those Bin Laden murdered in the September 11th terrorist attacks,â€ said Rep. Keith Ellison, one of the House’s two Muslims. “Even before 9/11, Bin Laden killed Americans and others at the U.S. embassies in Kenya and Tanzania, and on the USS Cole. Americans of all faiths recognized the end of a truly evil man last night. Osama bin Laden was a murderer. I hope his death marks the beginning of the end of the Al-Qaedaism ideology.

“This is something that we’ve been after for 15 years. So I think that what we’re doing now is going to try to take advantage of this opportunity that we have to demonstrate to the Pakistani people, to the people in the area that Al Qaeda is something in the past. And we’re hoping to bury the rest of Al Qaeda along with Bin Laden.â€

In the meantime, there is some concern about whether terrorist groups will try to retaliate against the U.S. and other nations that support Sunday’s action. Brennan said that there is always the potential that they may try to avenge the death of Bin Laden, but also pointed to the “new wave sweeping through the Middle East right now that puts a premium on individual rights and freedom and dignity.â€ Brennan said, “Some would-be terrorists may decide to put Al Qaeda in the past and move forward.â€