Glenn R. Carrington, national tax director for client services at Ernst & Young L.L.P., is on a mission. After 30 years in the tax profession, he is anticipating retiring in four to five years–but not before he imparts some advice on how his firm can attract and retain more African Americans. One of his ideas has already come to fruition. In 2007, Ernst & Young launched the Diversity Tax Leadership Conference, a program that exposes more than 100 invited students to the career possibilities within the tax profession over a three-day period in New York City. “We normally go on to hire 90% of the people we bring in,â€ notes Carrington.

Despite the program’s positive recruitment numbers, historically the black population in this field has been minimal. Minorities in Tax 2010, a study released by Tax Diversity, a career portal Website for diverse tax professionals, examines the number of blacks within the arena of tax, which includes public accounting firms; government, particularly the IRS; and corporate in-house tax departments. In 2008, blacks were represented at only 4% in public accounting firms, which include the big four: Ernst & Young, PricewaterhouseCoopers, KPMG, and Deloitte & Touche. Whites, Asians, and Hispanics were represented at 71%, 18%, and 5%, respectively. The study compares results first found in 2002 when blacks represented only 3% in public accounting firms, whereas whites were 81%, Asians 12%, and Hispanics 4%. While no data from in-house tax departments is reported in the study, it predicts that in-house tax department numbers for blacks mirror those in public accounting.
“By 2006, I realized we had the same problems because I didn’t see candidates coming through the ranks,â€ explains Anthony Santiago, founder of TaxSearch Inc., an executive search firm focused on recruiting tax professionals. He released the study when his searches for qualified, seasoned minority candidates surfaced few professionals. “I did an update to see if my intuition was correct and, sure enough, you can tell by the data results that not much has changed.â€

As a specialized discipline in accounting, there is a high demand in tax departments to fill their staff with more members. Since whites dominate the field, as baby boomers retire, there will be increasing opportunities for minorities. “The IRS indicated they are going to lose about 30% of their workforce within the next five years,â€ explains Santiago. “One of my major employers, which has a tax department of more than 400 people, estimated that they are going to lose approximately 35% of their workforce within the next five years.â€ Though employment of tax examiners, collectors, and revenue agents in federal, state, and local government is projected to grow by only 2% between 2006 and 2016, the federal government is expected to increase its tax enforcement efforts and there will be increased competition for positions within the IRS. Within public accounting, where those in tax focus on advising companies and preparing individual income tax returns, job prospects are very promising. The Bureau of Labor Statistics reports that almost 226,000 new jobs will emerge between 2006 and 2016. Opportunity for tax professionals can also be found within medium-sized firms, small businesses, and law firms. Additionally, there has been a recent demand for professionals who are skilled in foreign tax practices.
But getting people to fill the vacant space will prove difficult since fewer blacks are taking the certified public accountant (CPA) exam and majoring in accounting in college. According to the American Institute of Certified Public Accountants, 11.5% of blacks enroll in bachelor’s programs, while enrollment for master’s programs is 6%. However, the total number of African American accounting graduates for bachelor’s and master’s programs combined is 7%. One factor deterring blacks from taking the CPA exam is that in 47 states, there is a 150 semester hour requirement, which equates to a fifth year of school–a financial burden for some. There is also a social stigma attached to the profession: Accounting is thought to be boring, technical work focusing primarily on numbers, not people. Experts believe that these stereotypes could be better addressed if these opportunities were presented to students as early as high school.

For those who are focused on preparing for a career in tax, Santiago urges students to select schools with prominent accounting programs and maintain a grade point average of at least a 3.3 to be recruited by public accounting firms, who often target students at the more prestigious schools.
Recruitment is only part of the battle. Retention has also been a challenge, as illustrated in the study, which reveals that blacks represented 2% of senior management in public accounting firms in 2008, an increase of only 1% from 2002. As a result, frustrated tax professionals are forced to look elsewhere for opportunities. “What you will find is after X years of service and achievement in the tax arena, professionals will take their clients and create their own practice or join another firm, typically a medium-sized firm, which may have a significantly faster track to becoming partner,â€ explains Walter Smith, national president and CEO of the National Association of Black Accountants. “While firms have made significant progress in providing access into the profession, what you learn after getting them in the door is that, having effective programs, mentoring, and role models are going to be key to ensuring that employees stay and succeed in the company,â€ he says.

Shannon Nash, a partner at Guydon Love L.L.P. and owner of Nash Management Group, worked at KPMG in the national tax office for a year before deciding to move on because of a lack of professional support. “Companies may have programs where it’s forced mentorship. Some people aren’t good mentors and unfortunately, I got hooked up with someone who wasn’t a great mentor. When you have a good mentor, you know it because you have access to all kinds of information and get invited to the right things,â€ she says.

Nash further confirms that other factors such as a lack of career development as well as failure to cultivate relationships with key individuals in the firm also contribute to the attrition rate for minorities. “For me, it was like I went to work, I did a couple of assignments, and then I went home. I didn’t really see where it was going.â€
With such low numbers of African American representation in tax, Carrington believes many are missing out on an exciting and challenging profession. “Tax professionals provide a critical service to companies and are extremely relevant to a company’s profitability,â€ he explains. “You are never bored because tax law is always changing, you can develop lasting friendships since the profession requires teamwork, and it is very rewarding financially.â€

This article originally appeared in the February 2010 issue of Black Enterprise magazine. 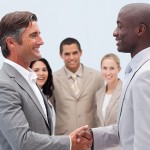 Savvy Solutions: When It’s A Good Idea to Self-Publish