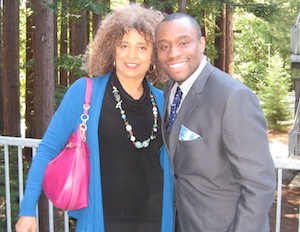 This week on a special edition of Our World with Black Enterprise, host Marc Lamont Hill visits with legendary political activist, scholar and author Dr. Angela Y. Davis for an in depth, candid and insightful look at her life, work and impact on America. An iconic figure in both the Civil Rights and Women’s movements, Davis, 67, is presently a retired professor with the History of Consciousness Department at the University of California, Santa Cruz and is the former director of the university’s Feminist Studies department.

Born in Birmingham, Ala., Davis was most politically active during the late 1960s through the 1970s and was associated with the Communist Party USA and the Black Panther Party, during which her image–haloed by a perfectly coiffed afro–became the ultimate symbol of strong and uncompromising Black womanhood. Prisoner rights have been among Davis’ continuing interests; she is the founder of Critical Resistance, an organization working to abolish the prison-industrial complex.

Davis earned a bachelor’s degree from Brandeis University, a master’s degree from University of California, San Diego and a Ph.D in philosophy from Humboldt University. She is the author of several books, including Are Prisons Obsolete? (Open Media, 2003), Women, Culture and Politics (Vintage, 1990) and Angela Davis: An Autobiography (Intl Pub, 1989).

In the News: Bishop Eddie Longâ€™s School Shuts Down; Report Shows Youth Vote Set to Drop in 2012 and More

4 Questions to Rock Your Revenue in 2012