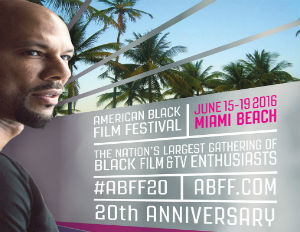 The American Black Film Festival and Black Enterprise are proud to announce that award-winning rapper, actor and philanthropist, Common, has officially been named the 20th Anniversary, 2016 ABFF ambassador.

Common’s lucrative film, television, and music career matched with his fervor for uplifting black art and the African American community, makes him the ideal artist to hold such an honor at the nation’s largest gathering of black film and television enthusiasts.

“I’m very grateful and honored to be the ambassador for the 20th anniversary of the ABFF,â€ says Common. “The ABFF celebrates and brings together the many different voices in black film today, and I’m proud to be a part of the conversation.â€

Common is no stranger to African American film as he’s starred in many black classics, including Brown Sugar, American Gangster, Dave Chappelle’s Block Party, Just Wright, andÂ Selma, where he received an Academy Award for Best Song, and the filmography just continues on.

In his role as ambassador, Common will be hosting “A Conversation with Commonâ€ at the 2016 event. This means that in addition to enjoying the exciting line up of film screenings, networking opportunities, insightful master classes, and informative talks, you may now also brace yourself for an inspiring message brought to you by one of the most respected and conscious voices of the African American artist community.

Get your festival passes now for front row access to all things nurturing, showcasing, and uplifting diverse talent at ABFF. Check out this ABFF welcome message from Ambassador Common below:

For more information on the American Black Film Festival, to purchase pass packages, or to book your hotel, be sure to visit www.abff.com. Please keep in mind that though rooms at the Ritz Carlton Miami Beach are currently sold out, you may still book at the Loews Miami Beach at the festival’s discounted room rate starting at $219.Â Click here and be sure to scroll all the way down to the bottom “BOOK NOW” button to book your room. Be sure to quote booking code:Â ABF616.

For festival updates, be sure to follow @blackenterprise and @abff or search #ABFF20. See you in June.