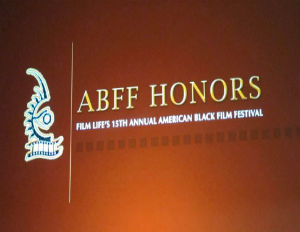 The American Black Film Festival is proud to announce the return of ABFF Awards, an annual gala and awards ceremony saluting excellence in motion pictures and television. ABFF Awards will commemorate those who have made notable contributions to American culture by way of film and television, and those who have placed diversity and inclusion at the frontlines of Hollywood.

On February 21, 2016 at the Beverly Hills Hilton, ABFF Awards will bring together hundreds of the industry’s most influential filmmakers, executives, and actors for a memorable celebration of impact and accomplishments.

Originally the Black Movie Awards (BMA), this show was first presented in 1997 during the closing ceremony of the ABFF and has seen the likes of Oprah Winfrey, Sidney Poitier, Morgan Freeman, Taraji P. Henson, Spike Lee, Cicely Tyson, Don Cheadle, Ruby Dee, Robert Townsend and many more influencers grace the stage in the spirit of uplifting black art. Next year, the ceremony re-emerges, re-branded as one of the most prominent events of awards season.

ABFF Awards will set the precedence for black excellence in filmmaking, as writers, directors, actors, cinematographers, and producers gear up for the 20thÂ anniversary of the American Black Film Festival hosted June 15-19, 2016 in Miami Beach, Florida. This year the festival takes its talent back to South Beach to celebrate two decades of nurturing black art and culture by means of exposure, networking, showcasing, and uplifting upcoming and existing African American artistry.

Now is the time to book festival accommodations. The official host hotel for the event will be the Ritz Carlton South Beach, 1 Lincoln Road, Miami Beach, FL, where ABFF activities will take place. Though ABFF’s room rate at the Ritz Carlton is currently sold-out, you may still book a room at the hotel by calling (305) 671-2609 and referencing group name “American Black Film Festival.”

Also, festival passes have been going fast, so now would be a great time to capitalize on reduced rates.

For more information on ABFF Awards and the 2016 ABFF Film Festival, be sure to visit www.abff.com and check out Black Enterprise (@BlackEnterprise) via social media for constant news and updates. “ABFF Awards:Â  A Celebration of Hollywood,â€ airs on BET and Centric Tuesday, February 23rd at 8 p.m. ET/PT.