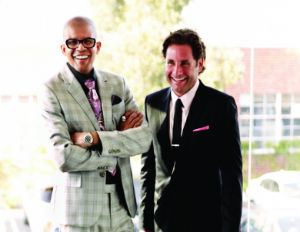 Businessman, fashionista, philanthropist, tastemaker, powerhouse–these are words best fitting for the co-founder of the number one black advertising agency in the nation.

Aaron Walton is CEO of Walton Isaacson (No. 1 on the BE advertising agencies list with $70 million in revenues and 150 employees). The firm blends science with sorcery by fusing in-depth research and highly targeted marketing with top-tier creativity to deliver a particular message.

In recognition of Walton Isaacson’s creativity and ability to flourish in an industry where many continue to struggle, Black Enterprise named it the Advertising Agency of the Year for 2013. The agency, in 2015, was named Southern California’s Minority “Supplier Of The Yearâ€ for its Â work with Toyota Motor Sales U.S.A. — Lexus Division for an unprecedented five times in six years.

Walton serves as the executive producer for the agency produced TV series Verses & Flow, powered by Lexus. The series, which airs on TV One, was nominated for an NAACP Image Award for “Best Variety Show.” Walton also serves as the executive producer for The 365 Black Awards, which was created for McDonald’s and airs on The Black Entertainment Network (BET). What’s more, Walton is firmly yet uniquely set in the world of fashion, having walked in famed designer Rynshu’s Paris Fashion Week shows more than five times.

BlackEnterprise.com caught up with Walton to talk about his interesting hybrid of success. See interview below.