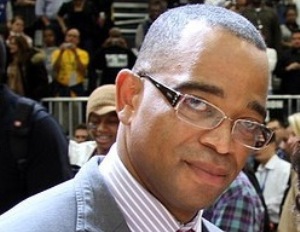 After a long battle with appendiceal cancer, legendary ESPN sportscaster Stuart Scott died on Jan. 4 in a Hartford-area hospital. He was 49. Scott was an ardent hip-hop lover and was known for mixing his sports reports with a blend of animated catch-phrases. He also inspired millions with his refuse-to-stop-fighting attitude. In honor of Scott, we revisited some of his most inspirational moments and his popular buzzwords.

Popular Scott Sayings: “Booyah!â€ was the 49-year-old’s trademark expression. Often Scott would pep up his commentary with statements like “Just call him butter ‘cause he’s on a roll,â€ and “Cool as the other side of the pillow.â€

Scott’s Poetic Tribute to MJ
He shared his spoken word poetry jam about Michael Jordan on SportsCenter in 2013. The short video was titled, “The Best Ever,â€ where Scott wished Jordan a Happy Birthday. “I was sold when he won 6 NBA rings…â€ he said. “You paved the way for athletes to say, ‘I am iconic, a brand…â€

37% of Americans Say Theyâ€™re Too Broke to Save

Recognizing the Signs of a Money Disorder