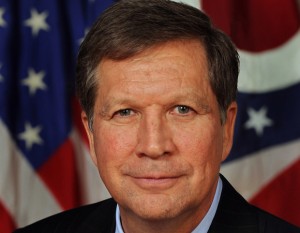 In an election cycle dominated byÂ viciousÂ personal insults, alarming calls to bar people from the countryÂ on the basis of religion, and rampantÂ sexism, John Kasich, the two-term current governor of Ohio, has built his campaign on a message of unrelenting positivity. Literally referring to himself as the “prince of light and hope,â€ Kasich has made his case for the GOP nomination by stressing the pragmatic productivity of his tenure as governor of Ohio.

[Related:Â How the Presidential Candidates Are Reacting to the Violence at Trump’s Rallies]

In this exclusive interview, BE Politics Associate Editor Hailey Wallace caught up with Gov. Kasich as he was putting the finishing touches on an extensive grassroots campaign in New Hampshire that had him polling in third place on the eve of the nation’s first primary. In a conversation that covered criminal justice reform, black small business, and more, Kasich made his case for the black vote.

Criminal Justice Reform
We decided to start with a polarizing topic that has become a mainstay of the national conversation regarding civil rights: criminal justice reform.

Kasich is the governor of the state where 12-year oldÂ Tamir RiceÂ was fatally shot by Timothy Loehman, who had been documented as unstable and unfit for dutyÂ by his own department.Â The events that transpired were met with the disbelief and anger of criminal justice reform activists, and many of Kasich’s fellow Ohio politicians. Among those politicians was state Sen. Nina Turner, who urged Kasich to consider reform.

“She came and asked if we can get together and make sure we deal with the issue of community, police, and raceâ€ Kasich said. “We worked together and what we have done is be able to put together a statewide policy on the use of deadly force. We have four metrics on hiring and training, recruiting.â€

With the guidance of Sen. Turner, Kasich signed into law an executive order to standardize police practices statewide.

“We just want to make sure that we don’t bury our heads in the sand, and I think that there are people who have legitimate complaints, who feel the system not only doesn’t work for them, but against them.â€

Kasich then emphasized the need for all voices to be heard.

When asked how he would combat black unemployment as president, Kasich pointed to his efforts as governor of Ohio.

“We have a set-aside law where the minority community gets into a situation where they get 15% of all state contracts,â€ Kasich explained, referring to the Ohio Minority Business Enterprise Program, which has been designed to ensure that a minimum of 15% of government contracts are awarded to minority-owned businesses. “And I voted on it 30 years ago. So I told all of my cabinet that we are going to meet those numbers. And we have.â€

In 1980, Kasich, then a young state senator, voted in favor of the 15% minimum goal. The goal would remain unmet for 35 years, until Kasich, now governor, made headlines when he announced last August that Ohio had surpassed the minimum allotment,Â awarding an impressive 19%Â of state contracts to minority-owned businesses.

Under Kasich’s predecessor, Democratic Gov.Â Ted Strickland,Â only 5.1%Â of contracts had been awarded to minority-owned businesses.

“What we’re doing is telling people ‘Look, we want to have goals for our minority businesses to develop, to be participating in that economically.’ And we’re also providing some resources for the development of some small businesses in that area,â€ Kasich said.Â  “These are all things that we’re excited about and we’re carrying out for the first time in Ohio.

“I can tell you that when I first started on the issue of set aside some people in my cabinet didn’t understand it. ‘Well how will we do it? And how will it work?’ I said, ‘Just go do it.’â€ Kasich continued. “And now some of those people, who didn’t understand at all, are some of the greatest advocates of making sure that our minority community has economic opportunities. And I think it’s just great.â€