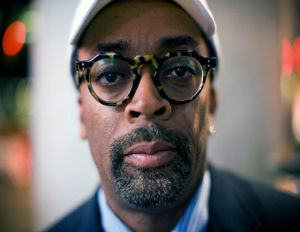 When Spike Lee talks, people listen. And so here we are. We caught up with him before he was honored by The Friends of EducationÂ of The Museum of Modern Art’s Jazz Interlude, a benefit galaÂ dedicated to promoting black artists, African American participation at MoMA as well as the support of its educational initiatives.

Spike was honored alongside the New York philanthropists and renowned art collectorsÂ Mera and Donald Rubell. A spokesman for The Friends of Education said the event raised nearly a half-million dollars.

The Knicks, just the day before, had pulled out a 100-97 victory in Brooklyn, just a stone’s throw away from his offices in Fort Greene. He spoke in a grovelly tone.

I forgot — you actually have to speak tonight.

I gotta say something.

Your dad, Bill Lee is an influential jazz musician and artist in his own right. And we’re here at this event focusing on jazz and the importance of education, so I just can’t help to think that he was a major part of the reason that you’re being honored here tonight. What was his influence on you as a young man?

Number one, I understood how hard it is to be a musician. I understood what it took to be an artist, and to be dedicated to your craft. It takes a level of commitment … but I really knew the struggle and how hard artists work.

And I’ve taken that to heart, too. I wouldn’t be here if it wasn’t for my father but my mother also. She was a very literate woman. She taught English, black literature. She was the one that was always driving me, telling me never to be satisfied with an A, not when you could get an A-plus. So she was always, always, always in my black ass. Really, I didn’t understand it until late, until after she died. She instilled the work ethic that I have. It came from my mother.

He scored a lot of your films, no?

My father scored my films at NYU. A film called Sarah, and a few more: Joe’s Bed-Stuy Barbershop, She’s Gotta Have It, School Daze, Do the Right Thing and Mo’ Betta Blues.

Was it, like, ‘Hey, Dad. Can you score my films?’ The work on those films is truly amazing.

It was a joy to work with my father. And in the beginning, his scores were better than my films. [Laughs.] So I had to raise my game.

Which five jazz musicians have had the most influence on you?

I’d watch a film by you on any one of those people.

You could always do a biopic. There are many jazz greats who have not had a film about them. So I will come back to that.

And a third generation educator.

Edumacator. [Laughs.] There’s a long line of edumacated black folks in my family.

Thank you. And congratulations.