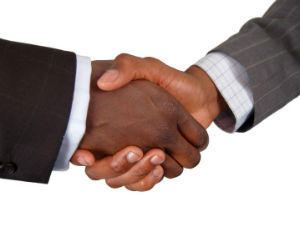 The word “negotiatingâ€ often brings to mind hard-nosed business people in suits stubbornly bidding over the details of a deal. It’s assumed that if one person “winsâ€ the war, someone has to lose. Not so. Business has evolved past the point of needing to be a tug of war between ego-driven people who refuse to lose.

1. PEOPLE SHOULD ALWAYS COME BEFORE PROFITS.

Relationships are the currency of influence and success in business. No matter how badly you want the deal or a certain outcome, do not use, manipulate, insult, or demean people to get it. Not only does it create bad energy that will come back to you, it also sets you up to be found out and have people walk away from the deal unhappy. While you can’t control anyone’s opinion of you, you can do everything you can to operate in integrity and treat other people with respect. This is the first and most important rule of negotiating.

2. KNOW WHO’S ON THE OTHER SIDE OF THE TABLE.

I can’t tell you how many times I’ve sat down to negotiate a deal and had people make all kinds of wild assumptions about me, my company, and my partners. A lack of research on your part says that you either don’t care enough to prepare properly or you’re an amateur who isn’t savvy enough to research the other side.

Take the time to understand who you’re negotiating with — what makes them tick, what they might want in the deal, why they might want what they want, what’s urgent versus important for them. As with sales, the more prepared you are, the more effective you’ll be.

3. KNOW WHAT YOU NEED, WANT, AND WOULD LIKE TO HAVE.

Before you arrive at the negotiating table, know what you absolutely cannot compromise and what you’re willing to concede. This prevents the temptation to get caught up in emotions and the desire to reach a conclusion. Even when it’s uncomfortable, it’s important to keep your objectives in the front of your mind and advocate for them.

The best way to start a negotiation is with a meaningful gift. In his classic book, Influence, Robert Cialdini explains the concept of reciprocation, which says that when we give something to someone, they feel indebted and want to create balance by returning the favor or gift. The reason to give is not to get something in return. The purpose is to set the tone for the negotiation.

If you’re a genuinely kind and generous person, you’ll want to do things that create goodwill. The gift could be something as big as courtside tickets to a sporting event or something as simple as a Starbucks gift card for $10. The gift is less important than the proper motivation and follow-through.

If you’re a fan of the ABC television show “Shark Tankâ€, then you’ve probably witnessed people talking themselves out of deals by not knowing when to stop talking. Going back to point 3, identify a point that’s satisfactory and immediately close. Don’t linger or talk out of nervous energy. Simply state the terms, seek confirmation, and then discuss next steps. Don’t give the other party the chance to change their mind and spend time waffling over inconsequential details. Be clear, be firm, and be progressive.

‘After Earth’ Stars Will Smith and Jaden Smith Dish on Money, Expensive Taste