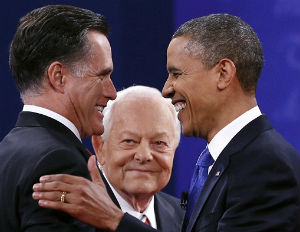 The final presidential debate has come and gone and here are 5 takeaways on last night’s debate which focused on foreign policy.

In what is surely going to be the most talked about moment of Monday night’s debate, President Obama slammed Mitt Romney for his inexperience, which showed as Romney tried to talk about the military budget citing his concern for the coming fiscal cliff. Romney said he wants to make sure the Navy has as many ships as they need, and the president jumped in.

“Bob, I just need to comment on this. First of all, the sequester is not something that I proposed. It’s something that Congress has proposed. It will not happen. The budget that we’re talking about is not reducing our military spending. It’s maintaining it. But I think Governor Romney maybe hasn’t spent enough time looking at how our military works. You – you mentioned the Navy, for example, and that we have fewer ships than we did in 1916. Well, Governor, we also have fewer horses and bayonets – (laughter) – because the nature of our military’s changed. We have these things called aircraft carriers where planes land on them. We have these ships that go underwater, nuclear submarines. And so the question is not a game of Battleship where we’re counting ships. It’s – it’s what are our capabilities.â€

This moment made Mitt Romney look out of his league.

Mitt Romney spent the majority of the debate sweating profusely. The twittersphere wondered whether his spray tan would begin to drip as the night wore on as he attempted to appear presidential. Â The problem for Mitt Romney is optics. In 1960, Richard Nixon’s upper lip sweat in the first televised debate may have lost him the election. These debates are both about style and substance. Romney sweating during a debate on foreign policy, an area which he has no experience, is important because it does little to reassure American voters that he is capable of handling the job if he wins in November.

Afghanistan doesn’t always make it into the headlines but it should as we have been fighting that war for nearly 13 years.

It’s hard to know whether Romney’s strategy going into Monday night was to do no harm, by agreeing with President Obama on a myriad of critical issues including Afghanistan, but it certainly is alarming that Romney flip-flopped on something as important as the war in Afghanistan. It will be interesting to see if the right wing calls him out for this flip-flop or if they stay silent this close to election day.

It was difficult throughout the night for Romney to sound reasonable and blend his Bush-speak so that American voters would see him as an adequate alternative.

More than once in the debate, Romney said he would make sure to kill the “bad guys.â€

Romney said in a conversation about the usage of drone strikes, “Well, my strategy’s pretty straightforward, which is to go after the bad guys, to make sure we do our very best to interrupt them, to – to kill them, to take them out of the picture,â€ and at another point in the debate said, “Let me also note that, as I said earlier, we’re going to have to do more than just going after leaders and – and killing bad guys, important as that is. We’re also going to have to have a far more effective and comprehensive strategy to help move the world away from terror and Islamic extremism.â€

The problem for Romney, as with other issues, he failed to explain any details about why and how his is a far more effective and comprehensive strategy towards terrorists. Getting the bad guys, by saying so with more emphasis, is not a policy, particularly when it isn’t coupled with any specifics. This might be Romney’s attempt at plain speak, but it’s not what Americans in 2012 want to hear.

In 2008, President Obama won in large part because Americans grew tired of bluster and cowboy strutting, and instead yearned for a more substantive and thoughtful foreign policy.

Overall impression: President Obama won the third and final debate by seeming like a serious commander-in-chief, who thoughtfully puts American troops in harms way and doesn’t talk big just for political gain. Mitt Romney is not credible on national security issues, mainly because, he’s always reinventing himself and on these serious subjects and it might turn out that American voters decide he cannot be trusted with his finger on the proverbial button.