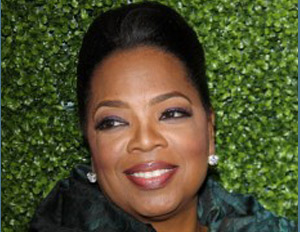 Last week, A-list stars and fans alike descended upon Chicago to wish talk show and media icon Oprah Winfrey farewell during the taping of her final episodes of the Oprah Winfrey Show before going off the air for good. In addition to stars ranging from Madonna and BeyoncÃ© to Halle Berry and Tom Cruise, tens of thousands of spectators, including BlackEnterprise.com’s own Karen Taylor Bass, took to the United Center to witness the end of an era. After taping her final show, which airs Wednesday May 25, Winfrey will continue building her media empire with cable TV’s OWN network and its roster of programming.

After 25 years on the air, the question remains: Who could possibly take the baton being passed by the $2.7 billion-dollar mogul and work toward becoming the new queen (or king) of media? Many have mentioned white media personalities, including Katie Couric, Anderson Cooper, and Ellen Degeneres. But, BlackEnterprise.com came up with five African American candidates who could be worthy heirs to Oprah’s throne or just savvy enough to build successful media empires of their own.Â