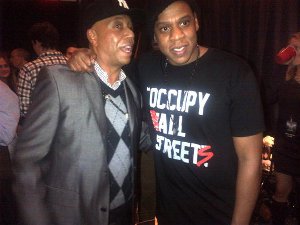 With news of Zuccotti Park being cleared out early this morning we wondered what would happen to some of the celebrity support the Occupy Wall Street movement’s been getting. When we first saw multifaceted mogul Russell Simmons showing his support for the movement back in September we were more than a little surprised. Here was a man with a reported net worth of $340 million cavorting with a rag tag bunch protesting corporate greed and economic inequality. “Russell Rush” even participated in their meditation flash mobs and invited celebrity buddies like Kanye West to press palms with protesters and witness the spectacle of it all.Â  Some think it hypocritical of the man behind the Rush Card to rail against “banksters” but if Simmons is willing to take a tax hike on the chin for what he feels is the betterment of the country,Â  more power to him.

Simmons’ support of Occupy Wall Street got us thinking: Which other notable blacks in the top 1% would show solidarity with the movement? Which ones wouldn’t be caught dead at Zuccotti Park? Here are five famous folks who’d only make an Occupy appearance if their limo got lost in lower Manhattan and they had to ask directions.

Why wouldn’t the great MJ ever show face at Zuccotti Park?Â  A “baller” in every sense of the word, he’s worth half a billion dollars, notoriously apolitical and as owner of the Charlotte Bobcats he’s way too busy making sure that players don’t get a bigger slice of the NBA profit pie. Jordan has proven to be one of the most vocal and hard-line NBA owners who want to keep players’ revenue share at 50% or less. He doesn’t even want to share money with other millionaires! Clearly, he’ll have no interest in sharing revenue with theÂ  99 percenters. However, if you want some comfortable shoes to wear while doing all of that marching, he’ll be happy to sell you some flashy kicks at the low, low price of $175.

How I Did It: A Food Personality Banks on Blogging

Michael Jordan Motorsports on the Track to Success