5 Critical Points for Donald Trump in the Second DebateÂ 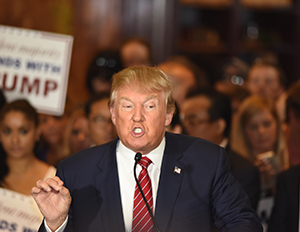 This Sunday’s matchups won’t just include NFL teams battling for the top seed with hopes of reaching the Super Bowl. The evening will include the second presidential debate that has friends-turned-rivals battling for the trust of the country and the Oval Office.

Most political pundits gave a slight edge to Trump for the first 30 minutes of the first debate, but say that Hillary’s debate experience, poise, and preparation helped her win the remaining hour.

If Trump wants to win the rematch, he has to realize that his often-controversial track record in business and temperament will be on trial again in the court of public opinion, especially among voters that are independent and undecided. They will decide the election.

So how can he do it?

Fortunately for Trump, who does best in less structured formats where he can feed off the audience’s response to him, this debate will have a so-called town hall format. In stark contrast to the formality of the first debate, with its grand stage looking out to the audience, podiums, and steering by a single moderator, the set will include chairs, two microphones, and a moderator encircled by a crowd of representative voters who will ask the questions. Candidates can move around in whatever way makes them comfortable as they make points about the economy, education, jobs, and other issues and tackle questions likely about controversial actions and statements made in their respective business, personal, and political lives.

The candidates can expect an attentive and politically diverse crowd to include those that are politically agnostic and even a little antagonistic about a political class that has failed to produce sustainable results for the middle class and those striving to overcome poverty. This could also be an advantage for Trump who is the quintessential outsider not beholden to the establishment, and perhaps even as hostile to it as many voters. He has to focus on that salient point heading into the second debate and be mindful of the following key points and political caveats:

With Trump sliding a little bit in the polls, he cannot afford to go off the rails and risk losing the second opportunity to lure support from Independent, undecided, and Republican voters that may be contemplating voting for Hillary.

About the Author:Â John Burnett has over 20 years of leadership experience at some of the world’s top banks and business information companies. John is an adjunct professor at Hampton University and Metropolitan College of New York. He holds a Bachelor of Science degree with honors in Leadership and Management Studies from New York University and an M.B.A. from The Johnson School of Management at Cornell University. John is an Urban Financial Freedom Fighter and a strategic adviser to New York Republican State Committee.