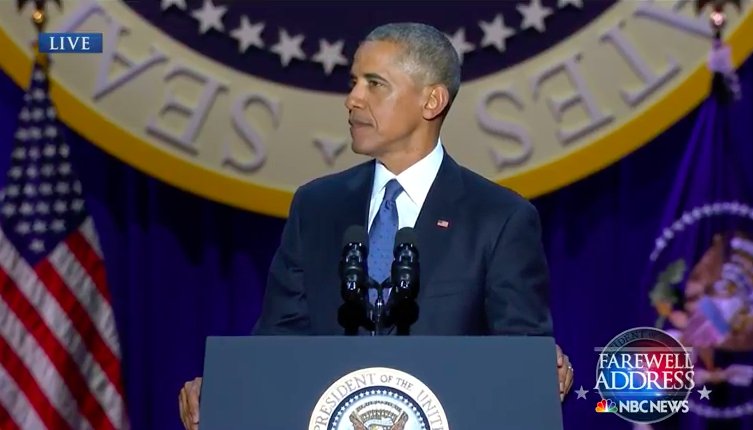 Former President Barack Obama re-emerged into the public eye on Monday after spending the first three months of his post-presidency life writing a book, vacationing with celebrities, and kite-surfing.

During Obama’s highly-anticipated public appearance, he participated in a 90-minute forum about community organizing and civic engagement with six young men and women at the University of Chicago.Â The former world leader opened the event with a speech reflecting on the beginning of his career as a community organizer and talking about the aspirations he hopes to achieve moving forward. He also shared great advice with the students that applies to us all, no matter where you are in your career. Here are five gems that Obama dropped.

“Listen to understand rather than listen to respondâ€

Good listening skills are essential for effective communication, especially in the workplace. Not only does listening help prevent miscommunication, it also enablesÂ you to convey yourÂ message more clearly and can alleviate frustration between two parties.Â  Plus, as Obama pointed out, being a good listener “will save you a lot of heartache and griefâ€ in both your professional and personal relationships.

“If you had pictures of everything I’d done in high school, I probably wouldn’t have been President of the United States. I would advise all of you to be a little more circumspect about your selfies and what you take pictures of.â€

Now that we live in a digital age of transparency, it may be tempting to post a picture of yourself on social media celebrating 4/20 or turning up at a strip club. However, before you do, remember that it only takes one selfie to compromise your personal brand and professional persona. Hence, it’s best not to share a picture that may be incriminating or serve to haunt you years later.

“The one thing that I’m absolutely convinced of is that yes, we confront a whole range of challenges from economic inequality and lack of opportunity to a criminal justice system that too often is skewed in ways that are unproductive to climate change to, you know, issues related to violence. All those problems are serious. They’re daunting. But they’re not insolvable.â€

No matter how insurmountable an obstacle appears to be, this quote from Obama’s speech reminds us not to be deterred. Instead of focusing on the magnitude of the problem, redirect your energy toward finding or even being the solution. And remember that oftentimes, we possess the answers that we’re looking for.

“There’s a reason why I am optimistic, even when things aren’t going the way I want.â€

Obama is known for his eternal optimism. Even though some may criticize him for being naive, optimism is a powerful tool that keeps us motivated. Plus, research shows that not only do optimistic people expect positive things to happen to them, they are also proactive in taking action to make good things manifest in their lives. As a result, they tend to lead healthier lives.

Live a Life that is Serving to Others

“I’m spending a lot of time thinking about what is the most important thing I can do for my next job? And what I’m convinced of is that although there are all kinds of issues that I care about and all kinds of issues that I intend to work on, the single most important thing I can do is to help in any way I can prepare the next generation of leadership to take up the baton and to take their own crack at changing the world.â€

It’s unfortunate that many financially successful people focus only on self-serving goals or become corrupted by greed. However, Obama delivered a message that encourages us to serve others. We should also follow his example in aiming to leave a legacy of change that helps and invests in those that come after us.

Watch former President Barack Obama’s forumÂ at the University of Chicago below. Selena Hill is the Associate Digital Editor at Black Enterprise and the founder of the award-winning talk show,Â Let Your Voice Be Heard! Radio. You can hear Hill and her team talk millennial politics and social issues every Sunday at 11 a.m. ET.

New Malaria Vaccine to be Tested in Ghana, Kenya, and Malawi